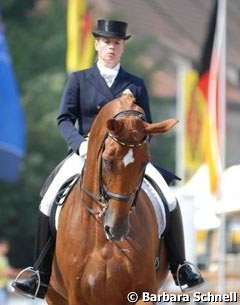 Isabell Werth won the 2008 German Dressage Championships with a solid Grand Prix, but a difficult Kur to Music. Isabell Werth had her hands full with Warum Nicht FRH when he spooked in the kur and was unfocused throughout the test.

They still scored a decent 74% and that score added up to their Grand Prix score was enough for the gold medal!

Nadine Capellmann on Elvis. Some small mistakes in the Grand Prix and a victory in the Kur to Music led to the bronze medal in the Championship.

Helen Langehanenberg and Responsible OLD. Helen is totally focusing on her Grand Prix career with this horse. At the show she was helped by Klaus Balkenhol, though her steady trainer is Ingrid Klimke.

Dieter Laugks and Meggle's Weltall VA (by Weltmeyer). They were great at the CDI Lingen, but Balve wasn't their show. Mouth wide open and resistance in the piaffe led to a 64% Grand Prix. They recovered in the kur and finished fifth overall in the male championship.