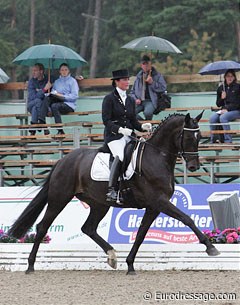 In Belgium, the selection trials for qualification for the 2008 World Championships for Young Dressage Horses have started. At national dressage show in St.Niklaas on May 1, 2008, twenty-four 5-year olds and six 6-year olds were entered for the qualifier.

The 5-year old division was won by Bjorn Vileyn on the Belgian warmblood bred Delano H, a Munchhausen x Wendekreis offspring. They scored 77.20% and were just ahead of André de Vlieger with Waldemar on 76.60%. Nick van Laer and the Belgian warmblood licensed stallion Dayano (by Dolany x Linaro) placed third with 74.40%.

The Belgian selection criteria for the World Championships consist of three selection trials of which the two best results count. Candidates must compete at 2 qualifiers to be eligible for qualification. The second selection trial is in Flemalle (May 31, 2008) and the final one in Diepenbeek (June 28, 2008).