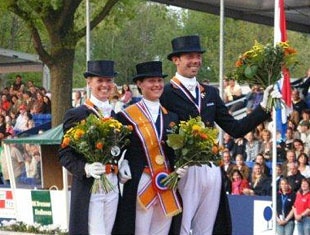 In the absence of the strongest Dutch Grand Prix combinations, Adelinde Cornelissen foregrounded herself at the 2008 Dutch Dressage Championships in Eindhoven, The Netherlands. Aboard her fantastic Dutch warmblood gelding Parzival (by Jazz)

, Cornelissen won all three rounds with top percentage marks. She scored 73.750 in the Grand Prix, 73.480 in the Special and 78.700 % in the Kur to Music. Three times, Cornelissen beat silver medal winning Anky van Grunsven on her second horse Painted Black (by Gribaldi). The bronze medal went to 2007 Dutch Euro Championship team gold medallist Hans Peter Minderhoud on Nadine (by Partout).

Since the winter indoor season, Adelinde Cornelissen has turned herself into the new Dutch shooting star. She won the 2008 Dutch Indoor Championships, beating Anky on Painted Black, and was also the best rider at the 2008 CDI 's Hertogenbosch. Cornelissen made it very clear that she is aiming for the third spot on the Dutch team that will ride at the 2008 Olympic Games. The sympathic Adelinde quit her day time job as an English teacher in March 2008 to focus fully on Olympic qualification.

Though Cornelissen put in stellar rides, the 2008 Dutch Championships were quite lacklustre with four cancellations by Holland's top riders. Anky and Salinero, Imke and Sunrise, and Laurens and Hexagons Ollright all claimed the show in Eindhoven did not fit in with their show schedule towards Hong Kong. Stephanie Peters and Jeff had to cancel because Jeff had not yet fully recovered from a virus.