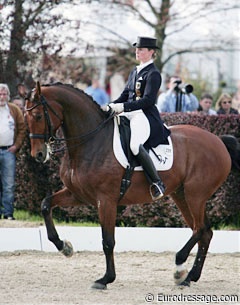 In 2007, the German Equestrian Federation launched a new show circuit for upcoming Grand Prix horses. Horses between 8 and 10 could participate in it, performing a simplified version of the Grand Prix with shorter stretches of passage and fewer steps of piaffe.

KHM Equestrian equipment sponsored the event last year, but this year it has become the "Medien Cup" and is getting full blown media attention, so far, unfortunately, only in Germany, though international riders can participate in the cup.

Winner of the first leg of the 2008 Medien Cup Qualifier was Isabell Werth with her new (now fourth) Grand Prix horse: First Class.

This Westfalian bred Florestan offpspring has a lovely passage but needs much more conformation in the piaffe. Isabell Werth has been training the bay gelding for one year now, taking over the rider from owner Kerstin Borms. Werth scored the winning mark of 73.450 % in the finals test.

Finishing second were the winners of the preliminary round, Ellen Schulten-Baumer on River of Joy. With the passing of Schulten-Baumer's number one Grand Prix horse Lesotho, the Hanoverian mare Donatha had to fill up his place. The mare, however, is not always a steady top scorer and it is a delight to know that Schulten-Baumer has a mega star coming along in "River of Joy". This Ravallo offspring has a passage to die for and is a delight to watch. They scored 69.800 %

Gina Capellmann-Lutkemeier has set her Grand Prix hopes on her newest acquisition, Baldessarini W. The bay mare, bred by Wolfram Wittig and by his Hanoverian stallion Breitling W out of a Diego xx dam, was competed by Birgit Wittig at the 2005 World Young Horse Championships and finished fifth there. Lutkemeier purchased the mare in 2007 as her new star for the future. They scored 69.750 % and placed third in the finals test.

Closing the ranks in the finals test of the Hagen Medien Cup qualifier was Carola Koppelmann on Insterburg TSF. This drop dead gorgeous Trakehner stallion by Hohenstein x Giorgio Armani won the bronze medal at the 2005 World Championships for Young Dressage Horses in Verden and bronze at the 2005 Bundeschampionate in Warendorf. Under Koppelmann he has climbed up the levels and is now schooling the Grand Prix.