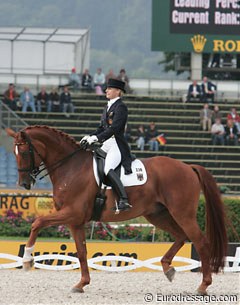 At the time she commented that Schmezer enabled her to "refind her style." Schmezer, however, was an interim solution and Capellmann has now found herself in Jurgen Koschel.

Capellmann is preparing her Hanoverian gelding Elvis VA (by Espri) with Jurgen Koschel, who lives in Hagen, Germany, much closer to Nadine's home in Wurselen, Germany, than Schmezer's stable 250 kilometers away.

"We decided on a training parternship after a test training at Nadine's home stable in Aachen, which went really well," Koschel explained. "Now I have to travel to Rhineland regularly for training."

Jurgen Koschel is the former Finnish, Dutch and Swiss team trainer and is now working out his own yard Hof Beckerode in Hagen, Germany. Nadine is aiming for a spot on the German Olympic Team.