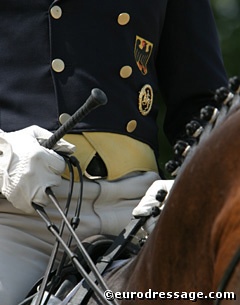 In a board meeting on April 2, 2008, the German Equestrian Federation decided on participating in the 2008 Olympic Games in Hong Kong, following the protests against Human Rights violations in China.

The German Equestrian Federation complies on all levels with the decision the Greman Olympic Federation (DOSB) made on March 24, 2008. It will compete in the Olympics.

The board of directors of the German Equestrian Federation condemns the offenses against the Human Rights in China, but is clear about their participation in the Games. "By participating, Germany will show on the one hand that is has learnt from the past, and on the other hand it will communicate that sport can better show its interactive power by participating in the Olympic Games than by boycotting it."

This bland statement by the German Equestrian Federation backs up the passive statement the Belgian Jacques Rogge, president of the International Olympic Committee (IOC) issued on March 23, 2007:

The lighting of the Olympic Flame in Olympia tomorrow [March 24, 2008] is a moment to reflect on the role of the International Olympic Committee (IOC).

The main responsibility of the IOC is to deliver the best possible Olympic Games to the athletes, who deserve it. We do this in a close and intense collaboration with the Beijing Organising Committee. Awarding the Olympic Games to the most populous country in the world will open up one fifth of mankind to Olympism.

We believe that China will change by opening the country to the scrutiny of the world through the 25’000 media who will attend the Games. The Olympic Games are a force for good. They are a catalyst for change, not a panacea for all ills.

NGOs and Human Rights’ activists want to leverage the Games and ask the IOC to act along by their side. The IOC is undoubtedly respectful of Human Rights. The IOC respects NGOs and activist groups and their causes, and speaks regularly with them - but we are neither a political nor an activist organisation.

As I stated last weekend, the events in Tibet are a matter of great concern to the IOC. The IOC has already expressed the hope that this conflict should be resolved peacefully as soon as possible. Violence for whatever reason is contrary to the Olympic values and spirit.

The IOC will continue to respect Human Rights. The IOC will work tirelessly with China for the welfare of the athletes and the success of the Olympic Games.