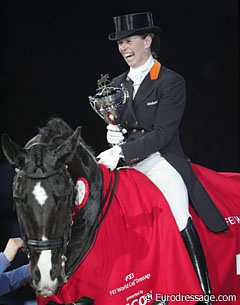 In front of a sell-out crowd of 11,000 spectators, Anky van Grunven won the 23rd World Cup Finals and claimed her ninth World Cup victory with a confident ride aboard her Hanoverian gelding Salinero (by Salieri x Lungau).

She won her fourth World Cup astride Salinero, the horse which she hopes will take her to her third Olympic gold medal this summer. The protagonist and runner up in these exciting Finals in the Brabanthallen in 's Hertogenbosch, The Netherlands, was Anky's perpetual rival Isabell Werth. A mistake in the one-tempi's stopped the German's score at 82.600%, 2.6% below Anky's winning 85.200%

It was a thriller Finals in Den Bosch with ten riders scoring above 70% in the Kur to Music and at least seven of them achieving more than 75%. The absolute world class had gathered in Den Bosch and it was exhilirating to see so many quality horses assembled; a good indicator of what the level of competition shall be in Hong Kong when more horses and more nations assemble there to strive for the ultimate champion's title which any ambitious athlete wants to win in his career.

Anky van Grunsven was last to go and the pressure was definitely on. Though she knew that Isabell had made one mistake in her ride and her score had stalled at 82.600%, Van Grunsven still needed to make sure that she stayed fault-free in order to win. With many imperfections in her Grand Prix ride on Thursday (which placed her second) Anky had to pull everything out of her hat to ride Salinero at his best. And that's what she did! 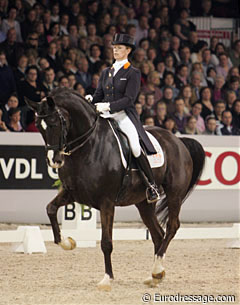 She rode a sparkling test to bland music. On a technical level there is little to comment. The pair entered in collected walk and halted dead still; a big improvement to the two rolling stops on Thursday. She opened her ride with a string of piaffe and passage, all beautifully executed with Salinero kicking electrically off the ground in relaxation. The extended trots were ridden with forward energy. The trot half passes are always outstanding with legs crossing to the maximum, but Salinero has his mouth open consistently in this movement. In canter, the Hanoverian gelding is traditionally croupe high in the changes, but the one tempi's were beautiful. Only in the two's some tension was spotted in each change to the left. The horse made shorter lead changes to the left compared to right and responded heavily with his tail in those changes. Fortunately, he kept his hindquarters low so in general the two-tempi's were well performed. Conclusively, no mistakes and much pezzaz in the ride resulted in the best technical supremacy. Furthermore, Anky's superb skill to ride metronomically to the music was well rewarded by the judges. 85.200% was the end score and earned the 2008 World Cup title.

"I'm very, very happy. I was most happy on Thursday, but there were little things because of lack of concentration," Anky commented at the press conference. "In the test [Kur], everything just worked out. There was nothing that I could have done better. At least that's what I think at this moment. Most of the time, I'm very critical of myself, but this, I thought, was one of my best tests with Salinero." 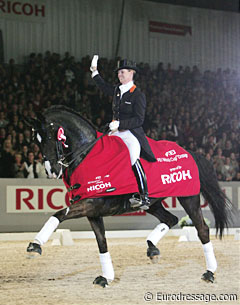 Anky's new music called "Dance of Devotion" is the biggest "issue" of her World Cup freestyle performance. Composed by Dutch piano virtuoso Wibi Soerjadi, her new freestyle is a distillation of Imke Schellekens-Bartels's Soerjadi kur which was premiered in 2007. While Imke's freestyle music is absolutely enthralling and emotional because of the meaningful piano sounds that build up to a climax, Anky's is dominated by violin tunes with a piano filtered to the background. There is no story in the kur, the viewer does not get carried away and even though there is a moderate crescendo at the end in the final piaffe-passage centerline movement, the music leaves no sticking impression. What a pity because Anky was known to be the Queen of the Kur because of her absolutely brilliant music that made her freestyles feel like a musical, a theatrical performance with a storyline set to climactic tunes. None of it is there in "Dance of Devotion" and Soerjadi shall definitely earn more credit for his achievement with Schellekens' freestyle than for Anky's.

Anky, on the other hand, is very pleased with her new music. "I'm really happy with it myself. I can understand that people have to get used to the music. Maybe I had to get used to it too in the beginning, but I immediately liked it a lot. I do think that maybe you have to listen to it a couple of times, but that's also the reason that I started a new kur already for this World Cup Final and of course for the Olympic Games."

Next Page of the 2008 World Cup Finals Report