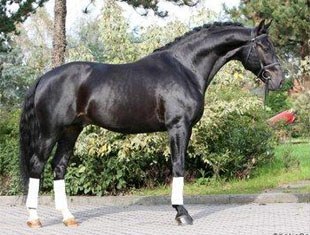 The Oldenburg licensed breeding stallion Sandrohall has been sold to Belgian junior rider Elly Rohart. The now 7-year old Sandrohall was discovered in Germany at the 2003 Oldenburg Stallion Licensing in Vechta by Angelique Hostyn.

Dressage rider Stefan van Ingelgem trained the stallion briefly in June 2007 and steadily since December 2007 after which he came into Stefan's ownership.

Junior rider Elly Rohart, who competed at FEI Pony level with Ald Faert Bobby, made the change to junior riders level at age 15. She already owns and competes Sir Cloud (by Saint Cloud) and will now be campaigning Sandrohall. The black has been gelded for that purpose so he can focus his attention on dressage.

Rohart is trained by former Belgian Grand Prix champion Arlette Holsters. It is Rohart's plan to compete both horses internationally on the youth riders circuit and then move on to Grand Prix level.

"Sandrohall came to me first in the summer of 2007 and in the few months that I trained him, he showed tremendous potential for the Grand Prix movements," Van Ingelgem explained. "He also got many breedings without having been competed much at national level. I am very grateful for the confidence and trust the Rohart family put in me when they bought Sandrohall. "