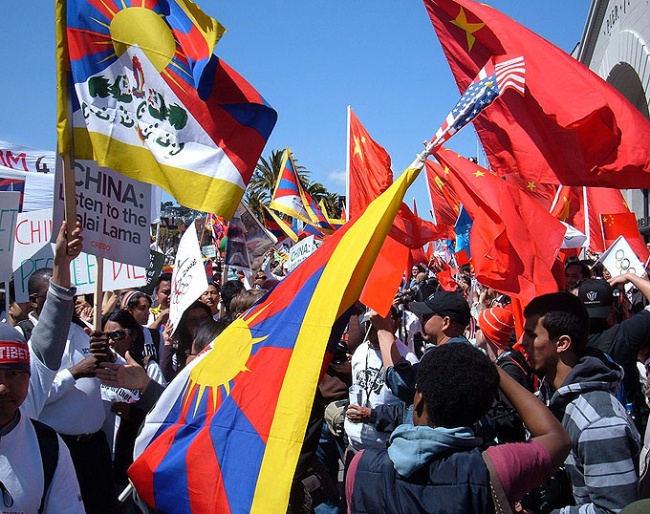 The French riders do not plan to boycott the Olympic Games in Hong Kong, the French news paper Libération reported. Now thatriots are going on in Tibet's capital Lhasa with the Tibetan population fighting against the disgraceful occupation and domination of Tibet by China, world wide speculation has been provoked to boycott the 2008 Beijing Olympic Games to make an international statement that human rights are violated in Tibet.

French Olympic medal winning eventing rider Nicolas Touzaint made the following ridiculously stupid statement in an article in Libération. "People ask us if we should go to the Olympic Games. I'll be honest: everything that happens outside the sport, does not interest me. Not because I don't want to know what currently happens over there. I'm focused on the Games, for which I have prepared myself for years. It's not my job to tell what policy China has to carry out. It's my job to ride horses."

It is exactly this kind of lackadaisical attitude that causes disinterestedness for the welfare of other people in the world and prevents their progress in life! Though boycotting the Olympic Games is not necessary (the spirit of the Olympics is to bring the world together), raising awareness for the intolerable Chinese dictatorship over Tibet absolutely is. Riders, or any athlete going to the Games, who can not rise above the selfish glorification of their ego desperately need to take a broader perspective on life. They need to look outside their box, which is dominated by their own material well-being. Making such statements, as Touzaint did, only proves their ignorance. They should either shut up or follow people who do have an opinion and can help make the world a better place.

This leads me to think even further. Why is this kind of attitude so typical in the horse world? As if there is no life outside the barn or behind the fences of show grounds. I realize this is a major generalization, but I have come across more horse people who have made similar statements. The greater issues in life are not addressed or just simply evaded by many of them. (Of course there are dressage riders who actively work for good causes, I have not forgot them).

Fortunately, there is also a large group of smart French athletes. In the article in Libération several of them speak out about using the Olympics exactly to make a statement. Several French sportsmen believe that by going to the Games, one can make a political statement much stronger than by boycotting the Games. "The Olympics are a huge megaphone, " French Olympic sailing medallist Yann Guichard stated. "It's a perfect tool for propaganda. Remember how China itself opened its doors to the world via the sport. It was twenty years ago thanks to table tennis that China became accessible and known to other nations."

"Hear Hear," I would say. Guichard puts everything in perspective. Even though sports are billion dollar earning businesses, they can be put in perspective when we see disaster in the world: famine, aids, global warming, cancer. One can make an equally powerful statement by going to the Games without a blindfold on and alerting the people for what is going on in China. Guichard concludes, "we shouldn't be naive. The next day after the Games, everyone will have forgotten about the uproar. The only question that remains is: "can athletes change the world order in fourteen days? Evidentially, when they don't go to Beijing, they risk not changing anything at all."