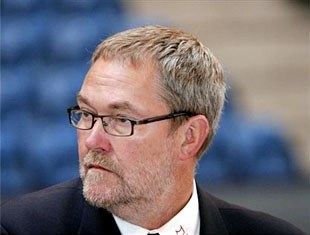 In 2004, the Herning Exhibition Center created a "Varmblodpris" (Warmblood Prize) for the person who has devoted much to the development of the Danish warmblood. Recipient this year of the prize is Poul Graugaard.

He received a check of 25,000 Danish Kroner (approx. 3,000 euro) for being a long time national and international supporter of the Danish Warmblood society and he is also a member of the Stallion Licensing Committee.

More awards were handed out at the 2008 Danish Stallion Licensing. HRH Pricess Benedicte of Denmark received a golden Achievement Award for being the most successful breeder of dressage horses in the Danish Warmblood society. Two of the horses she bred at her home Berleburg are currently highly ranked with the World Breeding Federation for Sport Horses. They are her daughter Nathalie Zu Saeyn Wittgenstein's Grand Prix horses Rigoletto (by Rubinstein) and Digby (by Donnerhall). 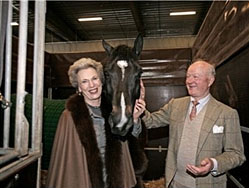 Nathalie is also training a third Grand Prix horse, Mastermind (by Master), which is also bred by her mother.

The Danish Olympic Society posted a video interview with Danish Olympic team candidate Andreas Helgstrand. You see footage of him riding Matine at the World Equestrian Games in Aachen followed by an interview with the Danish Equestrian Federation press officer and some videos of Andreas training Blue Hors Romanow at home. Unfortunately, the video clip is not subtitled but it provides lovely images.

Casir Ask was proclaimed Danish Stallion of the Year 2008. The grey show jumping stallion is by the legendary Cor de la Bruyere out of a Landgraf dam. He competed internationally as a Danish show jumping team horse and has produced many successful offspring that has given a new influx to the breeding of Danish jumping horses.

Back to the 2008 Danish Warmblood Licensing Index