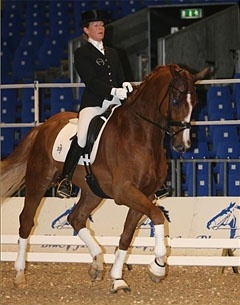 At the moment in the lead in the Championship is the chestnut Danish warmblood Charmeur (by Crelido x Fernando). Under his rider Astrid Gemal, the horse scored 9,5 for his gaits and character and one 10 yesterday in the first round. His total was 575 points.

The Danish Young Horse Championships consists of three rounds. In the first round the horses are presented by their steady riders. They are marked for walk, trot, canter, rideability and potential which is 60% of the total result. In round 2 and 3 the best horses are tested by a guest judge rider. This year, the guest judge is the sympathic Rune Willum. These rounds count for 40% of the total score.

Charmeur maintained the lead today by scoring the highest under the guest judge rider. He received a 10 for rideability and a 9 for dressage potential from the guest judge. His total is now 955 points. 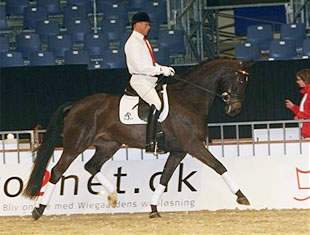 Currently in runner up position is Maria Anita Andersen with Gørklintgårds Dublét (by Diamond Hit x Ferro). The delightful Dublet scored 9 for rideability and 9,5 for potential with Rune Willum. His total is now 910 points.

In third position lies Sabine Pedersen's chestnut Atterupgaards Cassidy (by Caprimond x Donnerhall). So far he has scored 7 for character, and 8,5; 7,5; 7,5; and 8; for gaits and potential. Under the guest judge rider he scored 9 for rideability and potential. His total is now 823 points.

The finals are on Saturday.

Back to the Herning Index