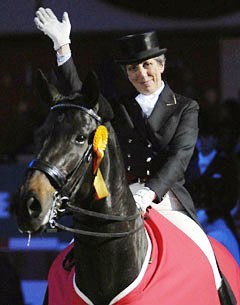 The Swiss dressage rider Silvia Ikle has cancelled her participation to the CDI-W Amsterdam this week because shehas broken her leg while viewing a sales horse with a client in Germany. Ikle tripped over an irregularity in the footing, stumbled and fell poorly, breaking her leg in three places. The complicated fracture resulted in a hospitalisation in Arnsberg (Westfalia). She was operated on the leg. The 59-year old Ikle will be out for months.

Former Dutch junior rider team member Danielle van Aalderen has announced the end of her equestrian career, Dutch magazine De Hoefslag reported. The 23-year old is seven weeks pregnant of her first child. The father is the Dutch rap artist Lange Frans (Frans Frederiks). As a student of Coby van Baalen, Van Aalderen won medals at the Dutch and European Junior Riders Championships. Her dressage career then took several dramatic turns. Her horse Festivo died of cancer. Her grandfather purchased Grand Prix horse Idool for almost 400,000 euro from Anky van Grunsven and Sjef Janssen. The horse died unexpectedly shortly after the sale and a legal dispute followed between Van Aalderen and VanGrunsven/Janssen. A settlement was reached between the two parties. Danielle then suffered from back problems and in 2006, she was stabbed in the eye after a street argument in the shopping street Kalverstraat in Amsterdam. She lost 60% of her visibility in her right eye. The perpetrator was convicted to 240 hours of community service and a 7,500 euro fee for damages, to which the offender has gone into appeal. "If this hadn't happened to me, I would certainly have continued with equestrian sport, because it was my dream," Van Aalderen told De Hoefslag.

The KWPN licensed stallion Junior STV has been retired from dressage. The last two years, the 17-year old Uniform offspring was competed by the Dutch Manuela Poulsen, who lives in Germany, but recently the grey stallion was unsound and the recovery would take a long time. Therefore, Poulsen and owner Mark Biemans decided to retire the stallion. Junior is now back at Stoeterij 't Vierspan in Handel, The Netherlands.

The eight-year-old stallion TMovistar won the Dodson & Horrell Young Dressage Horse Award at the recent British Breeding Breeders’ Dinner held in London. The eight-year-old stallion by Jazz out of Janny was bred in Holland and is owned by Sarah Tyler-Evans from Hampshire. He started his competition career ridden by Jo Barry, then Lucy Cartwright and last year Carl Hester took over the reins. In 2007, the latter combination was invincible during the three-week Spanish Sunshine Tour and won the Advanced Medium National Championships.

Jenny Ellis, the travelling groom for Britain’s World Class Performance Programme team captain Richard Davison, is the first dressage groom to win the Kuster BEF Groom Award.Jenny, 47, from Derbyshire, said: “I feel honoured. The fact that grooms are being recognised is fantastic; it never happened before this award was introduced five years ago and hopefully it will go from strength to strength.” The 2007 prizewinner won £1,000 of holiday vouchers plus Tim Nathan's Smash Hit Bronze Trophy, which she will keep for the year. Jenny was a full-time groom to international show jumpers before going freelance in 2001. Now para rider Simon Laurens and international show jumper John Whitaker are among her clients. Richard said: “Jenny is wonderful with horses and so experienced in all aspects of horsemanship. She is encouraging to younger, less experienced grooms and has worked hard to raise the status of grooms within the industry."

The management of the 2010 Alltech FEIWorld Equestrian Games has announced that Lloyd Landkamer will be the Discipline Manager for both Para-Dressage and Dressage. Landkamer, of Hamel, MN, owns DressageShowInfo.com and manages Dressage at Lamplight, the Dressage at the Florida Horse Park, as well as multiple competitions across the Midwest will bring with him his experienced staff known to many competitors in the Midwest. Mr. Landkamer becomes one of eights managers responsible for planning, managing and directing the World Championship competitions in eight equestrian sports, communicating with the High Performance community and related organizations, and overseeing development and administration of the discipline’s budget. The eights managers will work on a contract basis with the World Games 2010 Foundation, Inc.

The Board of Dressage Ireland is pleased to announce that Jenny Egan and Alison Kirkpatrick have been confirmed as the new Public Relations Officers for Dressage Ireland, effective from 1 January 2008. They have taken over from Paul Nolan, who has successfully promoted our organisation in recent years.