Judging is Accurate but the Scoring System is Not 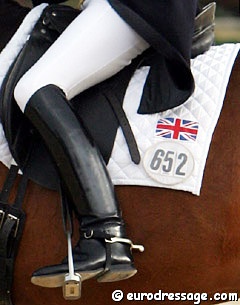 Considering the overwhelming response to my article on the half-point, I think this is an issue with which many people in dressage identify and would like to see implemented. National and international riders, trainers, judges, a few Official judges (“O” judges)

and marketing communications experts have written to me in support of the idea.

Since the last article, I have had the expert input from other fields who have spent considerable time and effort in calculating the theoretical accuracy of integer scoring versus half points and analysing the actual results of over 1,800 Grand Prix tests. I will incorporate their conclusions in the discussion below. But first, I think it is fair to give an airing to the very few but influential dissenters.

Several O judges had concerns and the more substantive were:

First, it is worth looking at the psychology of riders and judges – we have different motivations:

To look at these points in more detail:

Anyway, I can see how this happens in the kur. This is because the artistic mark is only 5 “movements” and accounts for 50% of the total mark so each movement has a very large coefficient. With decimal scoring the result would be accurate – whatever you get is what you really should have had. With half point scoring, each movement is rounded to the nearest 0.5. And each 0.5 accounts for at least 0.5% of the total test. So if the judges round up on the artistic score then it will add 2.5% to the final result compared with decimal scoring.

It is clear that such a change needs this kind of debate and investigation, following this the idea will be tried or rejected. To further support this proposal I asked a mathematician at Imperial College, London, to give his view on our current system. His view was extremely interesting.

He analysed our current scoring system and pointed out a possible perverse result of integer scoring. Take two horses, Horse A is a 6.4 mover for all 36 moves and Horse B is a 5.7 mover for 34 moves and a 6.6 mover for the other two.

Clearly, horse A is the better horse of the two and should score more highly. However, when you work out their score for a Grand Prix test, the result is amazing:

There is now considerable information available that I believe warrants further investigation by the FEI Dressage Committee and/or the International Dressage Judges' Club.

For fun, please vote For or Against and we will publish the results!

Please let me know your view on this subject at wayne@eurodressage.com.