Australian Team Selected to Compete for Place at 2008 Olympic Games 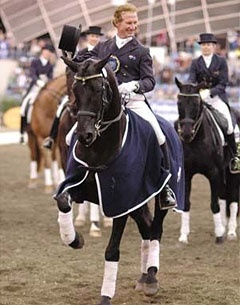 The Australian Dressage Selectors have announced the Australian Team that will compete against Japan and New Zealand for the right to send a dressage team to the Beijing Olympic Games.

The team will compete for Australia in the FEI Regional Dressage Team Olympic Assessments. The assessments, which will take place in three separate locations in Europe, Australia and New Zealand, will decide which two of the three nations in the Pacific region will be able to enter dressage teams in the Olympic Games later this year.

The Europe-based competitors will compete in front of five FEI judges in Cannes (France) on 31 January 2008. The Australian-based combinations will be judged by the same Ground Jury at the Sydney International Equestrian Centre on 4 February 2008. The Ground Jury will then complete the assessments in New Zealand and the two Beijing-bound nations will be announced shortly afterwards by the FEI.

The Australian Team is:

The reserves for the team are:

The EFA’s National High Performance Manager, Brett Mace, said ‘Having a full dressage team at this Olympic Games will be a tremendous boost for the sport in Australia.’ Mr Mace said it was important to note that selection for the regional assessment team did not have any bearing on who would ultimately represent Australia at the Olympics.

Team member Heath Ryan said, ‘After the uncertainties that EI brought to our industry, it is a great relief to see the path to Hong Kong falling into place.’ Ryan commented that, ’It is an exciting time for Clyde Wunderwald and myself as selection on this team is a significant step in our bid to claim a place on the Olympic Team.’

Selection for Beijing would be decided at designated selection events in Germany in May and June this year.