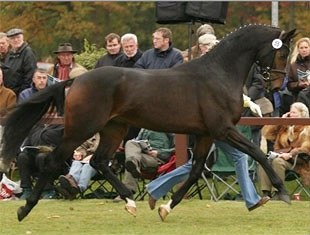 The 2007 Hanoverian Licensing Champion, Soliman de Hus, has returned to Germany to stand at stud at the Landgestuet in Celle. The dark bay Sandro Hit x Donnerhall stallion sold for 700,000 euro to Frenchman Xavier Marie of Haras de Hus near Nantes, France.

Marie and Celle stud manager Alex Brockmann came to an agreement that both Soliman de Hus as well the 2007 Hanoverian jumping licensing champion Cosinhus (by Cornet Obolensky x Gambler's Cup xx - he sold for 600,000 euro at the licensing,) will stand at stud in Celle. Both stallions will be available for breeding as of March 1, 2008.

There, Soliman de Hus will be trained in dressage by Hans-Heinrich Meyer zu Strohen. Sinhus (by Sunlight xx x Wolkenstein II), also purchased by Marie at the licensing, will be available at Aurich.