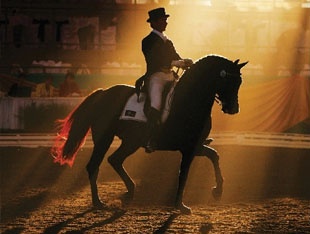 Australia will have the opportunity to qualify a dressage team for the Beijing Olympic Games at Sydney International Equestrian Centre on the 4-5 of February 2008.

This was supposed to take place at the Regional Team Qualifier in October 2007, where horses and riders from New Zealand and Japan were to come to Sydney to compete for the two team places available at the Olympic Games for this region. The Judges will now travel to Cannes (France) to assess the Europe-based Japanese, Australian and New Zealand competitors. Then they will come to Sydney to assess the Australian-based combinations. They will then travel to New Zealand to assess their riders. The Judges will announce the two successful teams on 14 February.

Australian based riders that are vying for team selection include Brett Parbery riding Victory Salute, Heath Ryan riding Green Oaks Dundee and Regardez Moi, Rozzie Ryan on Donna Carrera and Nadia Coghlan aboard Northern Campion. Four riders in total will be chosen from Cannes and Sydney to represent Australia at the assessment.

At the same time the International Jury of Judges will be available to judge other Australian riders who wish to ride the Grand Prix. All combinations who ride the Grand Prix will be able to gain MES (minimum eligibility scores) and World Cup Rankings. The President of the Ground Jury is Dieter Schüle (GER), teamed with Mariette Withages (BEL), Minako Furuoka (JPN) and Mary Seefried (AUS) and Jan Bird (NZL).

Admission to the Sydney International Equestrian Centre will be free for both days of the competition.

Photo courtesy: Cyberhorse/Auction of the Stars