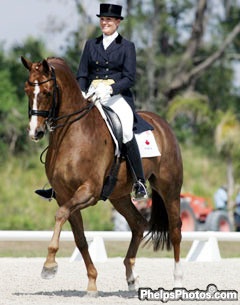 After the withdrawal of the Swiss dressage team from competing at the 2008 Olympic Games in Hong Kong, two Canadian team riders also announced their decision not to be available for Canadian Team selection for the Olympics.

Cindy Ishoy and Ashley Holzer cited both financial difficulties to meet the Canadian qualification criteria as well as the hot and humid weather in Hong Kong as decisive factors not to run for a berth at the Games.

The recently released Canadian qualifying process demands that riders and their horses compete in events in the United States and Europe before heading to "very hot" Hong Kong.

"This added stress is, in my opinion, too much for my horse," Nicoll-Holzer told the newspaper The Globe and Mail. Ishoy said she's not keen on the pollution factor that will be added to the mix of heat and humidity. While high heat and humidity may be manageable, she doubts spectators will see peak performances. The Canadian criteria are potentially so costly that Ishoy would have to win Lotto 649 just to qualify.

Factoring in travel stress on horses, Ishoy told The Globe and Main she would have to spend two months in Florida and another two in Europe, and if she qualified, she'd be in Beijing for 30 days. To return, she would have to send the horse back to the place of origin - Europe - which might include another quarantine, before heading back to Canada.

Ishoy and Holzer were both members of the bronze medal winning Canadian team that competed at the 1988 Olympics in Seoul. Ishoy delivered Canada's best individual Olympic result in dressage, a fourth place in Seoul. When the Canadian team qualified for the Seoul Olympics, Canadian dressage organizers brought international judges to Canada to score the routines. The United States has its top 12 riders take part in trials at home and then fly out to Europe. Both would be "doable," Ishoy said.

Some Canadian riders live in Europe. Christilot Boylen-Hanson has lived in Germany for many years, and Evi Strasser, who is the athletes representative of Dressage Canada, has lived in Europe for the past year, which would make their participation easier.

"Riders wish they had more input," Ishoy said. "Athens was a beautiful Olympics, but it wasn't animal or human friendly. That kind of heat and humidity was brutal."

Canadian dressage officials could not be reached for comment.