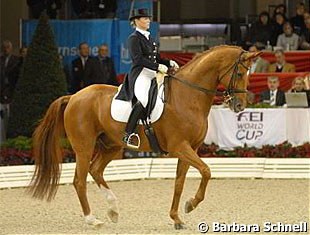 Isabell Werth and Warum Nicht FRH won their second World Cup victory at the 2007 CDI-W Frankfurt after having won at Odense. Switzerland's Silvia Ikle was once again marvelous and finished second in the Kur

, riding to her Bandoneon freestyle, which she premiered in Frankfurt last year.

The first horse to spook badly in the Grand Prix was Elvis. At the end of the first extended trot, he was met by the flashlight of some spectator's camera and by his own reflection in a plexiglass wall. While he usually isn't a horse that shies away, here he jumped away, and it took Nadine some time to get him back in line. Their percentage fell from over 80% to 50%. They made it back up to 69%, and the fact that such a low score was enough for the third place showed what a difficlut arena Frankfurt was this year. 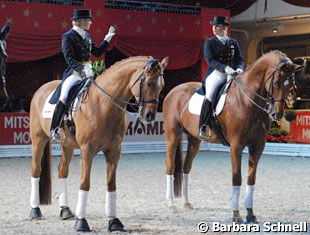 Isabell Werth's "Hannes" had similar problems. He started to get nervous during the half passes, and when flashlight hit him straight in the face during the second pirouette, he jumped away as well -- at which point Isabell resolutely interrupted the test, approached the spectators and told them to stop it and then resumed her test. during the prize-giving ceremony, Capellmann and Werth had a story to share. In the freestyle, Isabell won -- just as resolutely --, while Elvis was still tense and ranked fourth.

Laurens van Lieren presented Ollright with a far to narrow neck throughout the Grand Prix. The judges commented on that fact, and there was some visible improvement in the Kür the next day.

Monica Theodorescu and Whisper won the Grand Prix. There also was a new special award, the Fritz-Tempelmann-Preis for the rider who did the best and most harmonious warm-up. Two judges watched the warm-up arena especially for that purpose -- and they chose Theodorescu as well.... 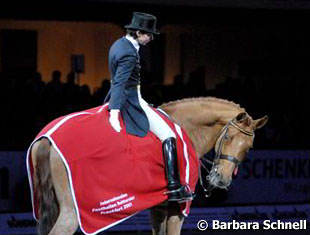 ...They probably would have decided differently on the second day, when Theodorescu had difficulties to get the chestnut going and did not only use the whip generously in the warm-up arena but also couldn't keep the horse from simply stopping a couple of times during the freestyle. He certainly has the nerve for a boiling arena like Frankfurt, but does he have the spark for Hongkong?

It is rather bitter irony that Patricia Callaghan's horse is named Joy, because if there was one "unhappy athlete" in this World Cup qualifier, it was him. During the freestyle, he successfully freed himself from his rider's relentlessly pulling and jerking hand and presented the audience with images that should really be passé in international dressage.