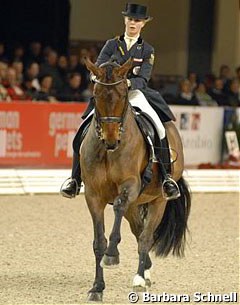 Austrian Victoria Max-Theurer and her 7-year old Augustin OLD won the 2007 Nurnberg Burgpokal Finals, which is the most important Prix St Georges show circuit in Germany. With a lead of 35 points, Max-Theurer reigned supreme

on the Oldenburger August der Starke x Rohdiamant offspring. They scored 73.80% in the final class, the Prix St Georges Special.

Only a month ago, Augustin was the cover hero of the St. Georg magazine, this month he won the prestigious Nurnberg Burgpokal. At age 7, he is one of the most successful small tour horses in the world, with more than 20 victories at S-level on his list of achievements. The phenomenally talented Augustin is bed by Vici's mother Sissy Max-Theurer.

"I couldn't have wished for a better result than this," Victoria Max-Theurer said. "I'm very happy that Augustin showed his great potential for collection well. He was just fantastic, concentrated himself well and made no mistakes. What a horse!"

The runner up was Oliver Oelrich on the licensed stallion Show Star (by Sandro Hit x Feinbrand). Owned by stallion station Holkenbrink, Show Star is a former Bundeschampion and now successful small tour horse. He finished second with 72.050%, while his rider Oelrich won the finals for the riders on the Sunday by winning the kur.

Finishing third were the winners of the warm up round, Matthias Alexander Rath and Ann Kathrin Linsenhoff's chestnut Hanoverian Weltmeyer Junior (by Weltmeyer). The pair scored 72.000%.