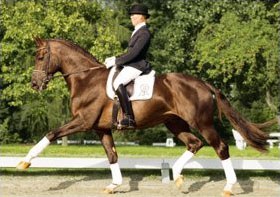 , achieving a total turnover of more than twelve million euro. Several renowned international equestrian sport moguls purchased ultra-expensive, top quality horses at the PSI Auction, which is known to be the best and most exclusive auction of sport horses in the world.

The liver chestnut Fine Time (by Florestan) sold for 780,000 euro to British Gemma Green. The second most expensive horse was paid for Dancing Elvis (by Del Piero). He sold for 700,000 euro. The same price was paid for the show jumper Cordioan (by Cardino). The reserve Bundeschampion London (by Londonderry) sold for 250,000 euro, and the licensed stallion Samba Hit III for 280,000 euro.