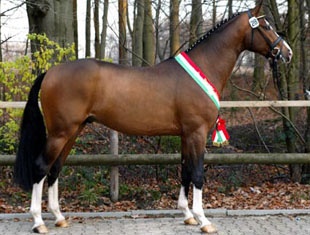 The bay Coronas (by Cornet Obolensky x Calypso x Valiant) was named the champion of the 2007 Westfalian Stallion Licensing in Munster-Handorf on November 28, 2007.

Bred by Angelika Rutten and owned by Hendrik Snoek, this stallion was the best jumper and impressed equally in his basic gaits at the annual grading of Westfalian stallions. He will stand at stud at Gestut Ligges in Ascheberg-Herbern, Germany.

The reserve champion was a Furst Heinrich x Prince Thatch xx x Weingraf colt, bred by Max Robben and owned by Gerd and Sonja Knoop of Gestut Hoftehof. Ranking third in the champion's ring was a Show Star x Rockwell x Lanthan descendant bred by Rudolf Kühlmann and owned by Antonius Schulze-Averdiek. This stallion became the price highlight of the auction following the licensing. He sold for the top price of 200,000 euro

Fifteen stallions made it into the premium ring and forty-eight were licensed in total this year. Other interesting dressage stallions finished high in the ranking in the premium ring were a chestnut Laudabilis x Riccione x Lanciano offspring and a dark bay Raikano x Werther x Calypso II son.