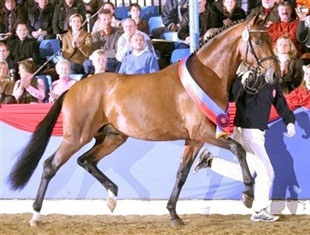 The bay Oldenburger branded champion is bred by Georg Sieverding and sold at auction for 340,000 euro to the Danish Jens-Peter Aggesen. The champion will stand at stud at Gestut WM of Eckhard Wahlers in Reessum, Germany.

The reserve champion of the licensing was a Sir Donnerhall x Rubinstein offspring, bred by Marion Menck and owned by Paul Schockemohle's Gestut Lewitz. The third placed stallion in the premium ring was Fackeltanz, a delightful Florencio x Feinbrand x Thymian xx son owned by Sissy Max-Theurer from Austria. She purchased the colt at the Vechta Foal Auction two years ago. 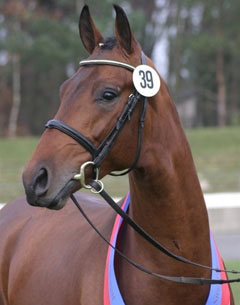 Eleven stallions made it into the premium ring and 39 of the 58 presented stallion were licensed. At the auction of licensed and non licensed stallions after the licensing, four dressage stallions sold for more than 100,000 euro, the price highlight being the champion stallion.

The second most expensive horse was the black stallion by Sandro Hit x De Niro x Pik Bube, who sold for 180,000 euro to Nordrhine Westfalia. The price of 100,000 euro was paid for the bay Don Primaire x Larno x Zortin offspring (sold to The Netherlands) and for the chestnut Sir Donnerhall x Don Gregory x Picasso son (to Germany).