Is Judging Corrupt or Just Inaccurate? 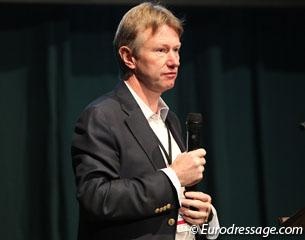 Even at the top of the sport, we all complain about bad judging. We think that judges decide that we are a “64% or a sub 70% combination” or that they somehow predetermine what our score will be no matter how well we do (part of me thinks there may be a grain of truth in this – even if it is only subconsciously done). Or that if we are famous, or the most famous at the show at least, that we will be rewarded with a better mark. Is this true? Or is it just that our current marking system is archaic and inaccurate?

Personally, I believe the current system is anachronistic. It makes us like look a model T-Ford in a world of Porsches. Look at the scores in figure-skating or gymnastics where they regularly score near excellence ie our equivalent of a 10. The FEI Dressage Committee may not have recognised this problem but it needs to fix it – now!

It does not only affect the riders at the top of the sport it has just as big an effect on the everyday dressage competitor.

For example, take a rider that achieved a solid 62% to 64% all year. Over the winter she makes considerable improvement only to find that she is still “rewarded” with 62% to 63%! How can this be?

To understand this, we have to look at how judges judge according to the current marking system. Take a normal horse, ie one that has basic paces for a 6 or a 7 or somewhere in between. Few have movement for a 5 or less or for more than a 7. So when a judge looks at a combination they start on a “this is a 6 or a 7 trot or canter” and move up or down on how well each movement is performed.

Judges mark what they see

The truth is that the judges judge what they see but have to mark within the system. Even the judges can see that there is little between the horses but in our system it is 10%.

The solution is simple, judges need to give half marks. For example, they could give a 5.5 or a 6 or a 6.5 or a 7. With this small improvement they will be able to reward much more accurately.

The impact of such a gross marking system is even more profound than at first appears:

Half points will dramatically and considerably improve our sport: it would be more accurate; fairer to the horse, the rider and the trainer; make for a better sport; and it will even allow the judges appear more reasonable and demonstrate their competence.

The FEI Dressage Committee needs to examine this in detail and take action from the top – inaccurate judging is not the main problem, but the marking system is!

I would love to know what you think and if you feel this would help you. Please let me know your view on this subject at wayne@eurodressage.com.