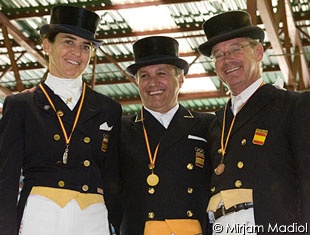 The silver medal went to Beatriz Ferrer Salat on her new Grand Prix horse Faberge, who is doing his first season at Grand Prix level. Aboard this 11-year old Hanoverian gelding by Falkland out of Akelei, Ferrer Salat totalled 201.863 points, placing second in the Grand Prix, winning the Special and ranking third in the Kur to Music. Ferrer Salat debuted her new freestyle "Baile de Máscaras" (Bal Masque), composed by Slings Music Cast, at the Spanish Championships. "Exceptional and exclusive in this freestyle," Cees Slings commented, "is an extra halt almost at the end of the freestyle, following and supporting the final crescendo of the music to the highest degree, with a final center line in passage." 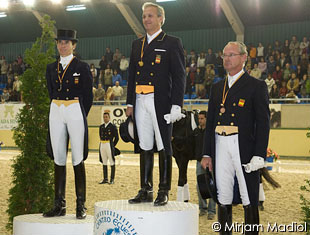 The bronze medal went to Victor Alvarez on the Andalusian bred Cava Iles (by Talisman IV). Alvarez scored consistent marks of 65% in the Grand Prix and Special, placing him third and improved considerably in the kur to music, in which he finished second on 70.1%. Alvarez also performed to a Slings Music Cast composition, “Guerreros de la Paz” which was composed this year. Alvarez' mount Iles was gelded and few months ago and just recently made his come back to the show ring.

The Spanish national title in the small tour went to young rider Carmen Naesgaard, who won all three rounds with crescendo scores. In the Prix St Georges she got 66,900%,k in the Intermediaire I 67.200% and in the Kur to Music 72,950%. She totalled 207.050 overall and stayed far ahead of silver medallist Beatriz Ferrer Salat on the Dutch warmblood gelding Peter Pan (by Gribaldi). This pair got 197.850 in total. The bronze medal went to Jose Manuel Estrada on Nobel. They achieved 194.450 in total.