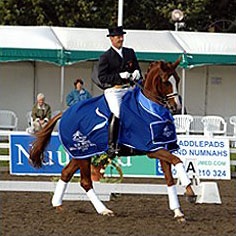 In the absence of all British championship team members, Spencer was able to ride Ann Cory's and Carl Hester’s 13-year-old 17.1hh Donnerhall gelding to victory in the grand prix and took the runner-up slot in the grand prix freestyle behind Maria Eilberg and Two Sox.

Last year, Spencer and Dolendo appeared on the international stage with much success and were working towards being selected for the British team for this year’s European Championships. However, Dolendo was out of action for the first half of the season and only returned to the competition arena at Hartpury CDI in mid-July, regaining last year’s form to win the grand prix special at Hickstead CDI at the end of July.

Spencer, who is leaving for France with Dolendo on Tuesday to compete in Saumur CDI next weekend, said: “We won the freestyle class here last year, but he has not done a freestyle test since then. What I’m most pleased about is that he is slowly improving and there is more to come. It’s not quite sunk in that we’ve won. Without Carl and his support, we would not be here now.”