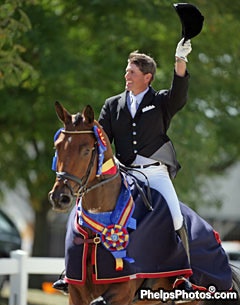 Hickey came with high expectations for the young Hanoverian gelding by Contucci x Bordeaux under his tutelage that had just returned from the 2007 World Championships for Young Dressage Horses in Verden, Germany. Canton came with no expectations. “I came here expecting nothing and just hoping for the best. My plan was to ride the horse as best I could,” Canton said. “I’ve always had a feeling he’s a very special horse and he proved it today.”

Cabana Boy, owned by Hilltop Farm and bred by Dough and Shannon Langer of Wisconsin, was a clear favorite coming into the Five-Year-Old competition. Cabana Boy received an overall score of 8.480 after two days of competition. 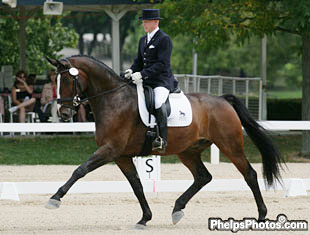 A “fabulous feeling” is how Jason Canton described his win in the Six-Year-Old competition at the Markel/USEF National Young Horse Dressage Championship with Grandioso. “It’s been a long year and a lot of hard work getting to this point.” The Westfalen gelding was bought by Canton, of Alpharetta, Georgia, in Germany when he was a five-year-old.

Grandioso (Grosso Z – Popocatepetel by Palisandergrund) was bred in Germany by Willi Hillebrecht. The judges certainly liked the horse. Speaking for the judges’ panel, Marianne Ludwig said, “As I heard Hilda say yesterday, you are a lucky man. Super impressive horse. Grandioso’s final score was 8.368.

Waterloo Se, with California’s Willy Arts aboard, is the 2007 Champion in the Markel/USEF Young Horse Dressage Championship for Four-Year-Old Horses. The Championships are being held at the Kentucky Horse Park. The Dutch Warmblood gelding (00 Seven – Showbiz by Jazz), owned by DG Bar Ranch and Siegi Belz-Fry, earned an overall score of 8.62 in Saturday’s championship class.

A full report of the 2007 USEF/Markel Young Horse Championships with articles, quotes, photos and scores at Horsesdaily.com