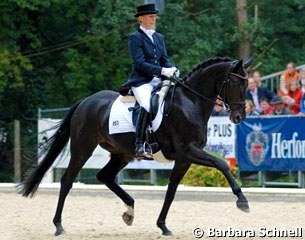 Samira, the grand champion of the 2007 Bundeschampionate, has been sold to Tony and Sarah Pidgley of Kilbees Farm Stud in Windsor , Great Britain . The 6-year old Rhinelander bred mare has been the revelation of the 2007 German Young Horse Championships in Warendorf

, Germany , 29 th August – 2 nd September 2007 , scoring the highest mark ever achieved by a 6-year old in the history of the Bundeschampionate.

Under Bärbel Förster-Henrich, Samira scored a 9.7 overall and received a 10 for trot and submission and a 9.5 for canter, walk and general impression. She beat the record score of 9.5 previously achieved by Samira’s sire Sandro Hit, Wanesco and the legendary mare Poetin. Judge Christoph Hess commented on Samira's performance stating that, "we've never seen anything like this before in this arena."

New owner Tony Pidgley is thrilled about Samira. "We're very happy today, because she is a once in a life-time horse," Tony Pidgley told Eurodressage. "We saw the horse and thought she was fantastic. We realised you don't see paces like that every day, and even the judges were arguing she should have got 10's for everything. But, it is her temperament that we really love. She is always the same."

On Thursday morning 6 th September 2007 , Samira passed the pre-purchase exam with an immaculate vetting. The black mare will arrive in England September 8, where Sarah Pidgley will continue the mare's dressage career under the supervision of Kilbees Farm's head trainer Markus Gribbe.

Samira is bred by Breeders Group Schumacher and is by Sandro Hit out of a Rockwell dam. "Mr Schumacher did a super job on this mare as well as the rider, and I can assure you that she won't be sold again," Pidgley commented.

Tony Pidgley also broke the news that he acquired two more breeding stallions from Paul Schockemöhle for Kilbees Stud: Rosario and Diamonit. The 8-year old Oldenburg stallion Rosario (by Rubinstein x Castro x Luxus) was test ridden by Sarah a couple of weeks ago. The match was perfect especially because of his fantastic temperament. The 4-year old Oldenburg bred Diamonit (Diamond Hit x Santander x Freiherr) will also move to England. Both stallions will remain available for breeding via Kilbees Stud and Paul Schockemöhle's stallion station.