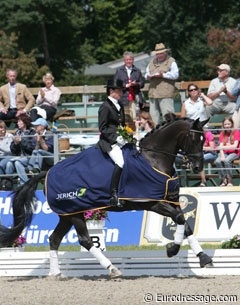 Unlike other years, the 5 and 6-year old classes are taking place on different days in order to spread the program of the CDI Verden, which also features an international Grand Prix, a national Prix St Georges and the Hanoverian young horse championships (alongside a CSI). In the WM-arena (the fourth different location for the World Championships on the Verden show grounds), Dutch rider Miranda Rongen represented Germany aboard her German bred Deveraux (De Niro x Rohdiamant) and won the class with a total score of 8.78 points.

The black gelding Deveraux is bred by Auguste Berding and owned by Miranda's father Harry Rongen. The horse excelled with his extremely cadenced trot which was relaxed but engaged and balanced throughout the ride. It could have been a bit more naturally uphill. The walk was very ground covering with three hooves overtrack and the canter featured much suspension and bounce. The lightness and the steadiness of the contact with the bit was exemplary and the judges rewarded that with a 9.0 for submission and 9.0 for overall impression. The gaits earned an 8.8 for trot, 8.6 for walk and 8.5 for the canter. All in all a total of 8.78 and good for the victory in the qualification class. 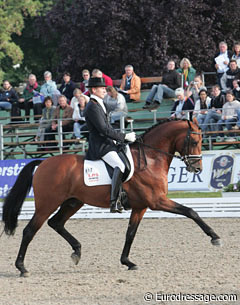 The 6-year old qualification class started at 8 AM in the morning and the first group of horses contained four of the best six-year olds at this year's championships. Placing second thanks to the generosity of the judges was Edward Gal aboard the KWPN licensed stallion United (Krack C x Partout). United is a super talented young dressage horse with very good basic gaits, but his sour expression -- his ears were lying flat throughout the ride -- was an example of an "unhappy athlete".

The halt was crooked and the horse was often stiff in the back. Furthermore, there was hardly a halt for the rein back. For a technical point of view, the test should have scored much lower than the generous 8.7 the judges' panel awarded. Nonetheless, the gaits of United are high quality. The horse moves with much dynamics. In trot, he was elegant, active and engaged, though sometimes the movement was too passagey and lacked forwardness. The walk was very good in rhythm and the canter was very expressive and well suspended, especially the extended canter, and the flying changes were big. The judges scored the gaits 8.5 for trot, 8.2 for walk and 8.7 for canter. In light of the sourness, the open mouth and the technical mistakes, the score of 9.0 for overall impression was too high. With a total of 8.62, United placed second.

Third place went to the 2006 World Champion Uzzo (by Lancet x Indoctro). The selection of Uzzo for this year's championships was a problem and not until two weeks before the show it was announced that Uzzo would participate. Today, Patrick van der Meer presented a fresh horse who has improved much in the trot work, but whose canter work was not always clear in its 3-beat rhythm. The trot was the highlight of the ride being very balanced, light footed and expressive. The judges scored the gait 8.7. The walk was good (7.9) but the canter needed to be more cadenced and rhythmical (8.5). Both for submission and overall impression, the pair received an 8.8. Their total mark was 8.54.

The fourth place was captured by the Hanoverian licensed stallion Rascalino under Wolfhard Witte. Bred by Edgar Butt and owned by the Celle State Stud, the black stallion was the last horse to enter the ring and impressed immediately with his flowing trot tour. The horse moves with much elegance and lightness and showed a fantastic second extended trot on the diagonal (see picture). Witte showed Rascalino in a nice frame but his horse lost some balance in the traversal movements. They scored 8.7 for trot. The walk was ok but not spectacular (7.5). The flying changes were outstanding but the judges were generous in scoring the canter 8.9, especially in light of the mark San Remo received (8.8), the horse with the best canter of all 6-year olds in Verden. Witte and Rascalino achieved 8.52 in total and ranked fourth. 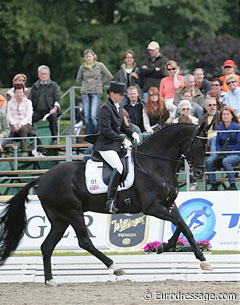 The black Oldenburg stallion San Remo, the bronze medallist of the 2006 World Championships, placed fifth in the 6-year old qualification class. The horse has changed much in one year time gaining muscles and losing a bit of "baby" fat. Unfortunately today the contact with the bit was not as ideal as one is used to seeing. British born Susan Draper-Pape had her hands full keeping the contact steady and the position of the head at the vertical. The trot was rhythmical but in the extensions there could have been more engagement with the hind legs moving towards the gravitational point. The rein back was hesitant, the walk was good but not brilliant. The canter, however, remains the strongest gait of this horse with a beautiful moment of suspension in each stride. There was a hiccup in the second flying change. The judges gave 8.4 for trot, 8.2 for walk and an underrated 8.8 for canter. Their 8.4 mark for submission was a bit high maybe. The overall impression earned an 8.7 and the total mark was 8.50.

The Dutch warmblood Freebird Ucelli T was another lovely young dressage horse that ranked high in the 6-year old qualification class. Under Hans Peter Minderhoud, the dark bay Olivi x Gribaldi offspring moved with much grace and ease. The trot was beautiful with much freedom in the shoulder but sometimes became a bit too passagey. The connection with the bit was constant and the position of the head stayed the same throughout the ride. The walk was good with two hooves overtrack and the canter showed nicely balanced strides. The first flying change was good, but the second early. The judges scored the pair 8.5 for trot, 7.8 for walk, 9.0 for canter (bit high in comparison to San Remo), 8.2 for submission and 8.8 for general impression. In total 8.46 and a sixth place.