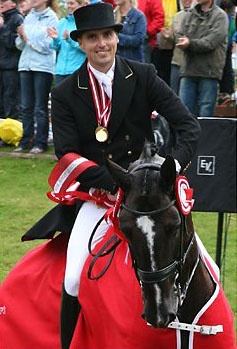 Both Blue Hors Matine and Blue Hors Don Schufro are not fit for the show and will stay home.

"It's really annoying that Don Schufro won't be ready. I'm taking Casmir to Turin which is not the optimal situation, but we're dealing with Olympic team qualification and I want to help Denmark qualify to the team for next year. I'm not the type who goes to the Europeans to participate, but I want to go to win. But I have to be realistic and with Casmir there is no chance for a medal. He's a super horse, but he's still very young and lacks routine and strength. But he's got all the basic qualities and in one or two years he'll be totally different," Helgstrand explained.

There is much commotion about which horse Helgstrand is to ride as he's considered the anchor rider of the Danish team. To European Championships are an Olympic selection trial and Team Denmark hopes to qualify for the 2008 Games in Hong Kong via Turin. Now that Helgstrand is riding Casmir, Denmark will be sending a team of young horses to Italy which makes the fight for team qualification harder. The Danish team needs to place in the top five to obtain Olympic qualification.