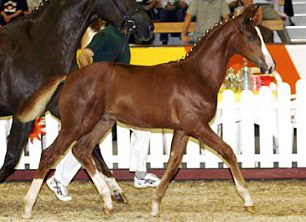 The bay show jumping bred colt Tamango, by Tinka's Boy out of a Carthago Z dam, became the price highlight of the 2007 Elite Foal Auction in Munster, Germany, August 12, 2007. The Westfalian branded colt, bred by Heinz and Elisabeth Schulte, sold for 38,000 euro to a Westfalian buyer.

The second most expensive foal of the auction was James Dean, a Rhinelander banded Jazz Rubin x Fidermark colt bred and presented at auction by Lia Geilenkirchen. This liver chestnut colt sold for 36,000 euro to Portugal. The bay colt Sunny Niro, by Sir Donnerhall x De Niro, sold for the same price of 36,000 euro to The Netherlands. Hans Hermann Winkelmann is the breeder of this colt. 88 colts were sold in total.

The most expensive filly was Rosamunde, a Rhinelander branded Rock Forever x Fidermark offspring bred by Hannelore Koch. The filly sold to a Westfalia based dressage enthusiast. 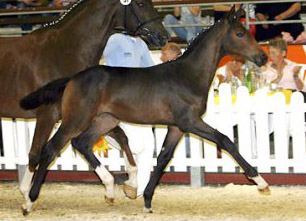 Fourteen pony foals were auctioned, achieving an average price of 4,857 euro. The most expensive one was Clarence, a bay Westfalian colt by Classic Dancer x Night Star III, bred and presented by Manfred Twiehaus.

Eighty-eight colts were sold in total for an average price of 8,201 €, while 59 fillies sold for an average price of 6,671 €. 161 foals in total were auctioned. 17 of them move abroad to England, 10 to The Netherlands, 5 to Brazil, 4 to Austria, 3 to Luxembourg, 2 to Belgium, Portugal and Russia and one to Spain, France, Sweden, South Africa, the U.S.A. and New Zealand.