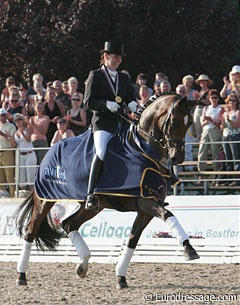 The Westfalian mare Cayenne W and the British Susan Draper-Pape were the undisputed winners of the 5-year old division at the 2007 World Championships for Young Dressage Horses in Verden, Germany, on Saturday August 4, 2007.

In ideal weather conditions, 14 youngsters were presented in the finals which took a dramatic turn at the end of the class when the winners of the qualification class, Blind Date (by Breitling x Donnerhall) and Brigitte Wittig had to withdraw from competition minutes before their entry as the mare sustained an injury in the warm up ring. Cayenne W was the last horse to go and took the title with a phenomenal ride.

Susan Pape and Cayenne W excelled in the trot work with mare moving very uphill, active behind with super self carriage. The walk was good and the canter was with outstanding suspension and showed lovely simple changes.

Stephen Clarke, speaking for the panel of judges, praised the horse as "an example of a beautifully trainer horse with huge potential for the future. The panel stated that her trot was regular and active in a natural way. The walk had a good, clear rhythm but could have been more relaxed. The canter was very active behind with clear differences in the tempo. "This is the picture of a young horse trainer in the right way," Clarke concluded.

The judges scored the pair 9.0 for the trot, 8.4 for the walk, 8.9 for the canter, 8.8 for submission and 9.0 for general impression. This totaled into 8.82 which earned Cayenne W the title of World Young Dressage Horse Champion in the 5-year old division.

Cayenne W is bred by Grand Prix dressage rider and trainer Wolfram Wittig, who had no less than three (!!) of his breeding products competing in the 5-year old division at this year's World Championships (Cayenne W, Blind Date, Bertoli W). Cayenne W is by Carabas out of Wittig's Bismarck dam and is owned by the Japanese Akemi Tanaka. 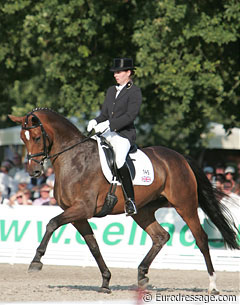 The owner purchased the mare of a video and on good faith of Ingo and Susan Pape's judgment and saw the mare in real life for the first time on Wednesday August 1, 2007. Tanaka has one more dressage horse which descends from Pape's breeding stallion Davignon and she investigated the Pape family as breeders and came to them with the desire to purchase an international caliber dressage horse after having attended the 2006 World Equestrian Games in Aachen. The event sparked her desire to be the owner of a world class dressage horse with the result that she purchased Cayenne W in February 2007.

Susan Pape was very moved during the award ceremony, wiping away her tears during the national anthem. At the press conference Pape expressed her joy and satisfaction with the gold medal. "I'm so happy. She's a fantastic horse which gives everything and which is so much fun to ride. She has so much potential and I'm happy that I get the opportunity to ride her."

The judging in the 5-year old division at the World Championships was easy to follow and hardly disputable. Maybe here and there they were too generous or too conservative with their points, but their general impression with the quality of the horses and their final ranking of the top 14 was very acceptable. It was a pleasure to hear Stephen Clarke put the finger on the wound where the true mistakes in each test lay and which were the strong points of each horse.

The silver medal went to Juliane Brunkhorst on the delightful Revanche de Rubin, an Oldenburg stallion by Rubin Royal x Landadel. The bay stallion has a beautiful silhouette with a gorgeous top line and a naturally uphill conformation. The trot tour was very clean and well regulated as well as balanced. In the canter, the horse showed fantastic ground covering extensions. 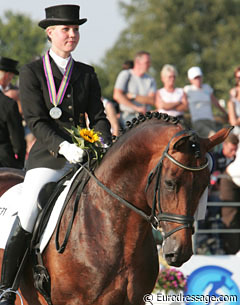 The judges commented that Revanche de Rubin (bred by Harli Seifert and owned by Peter and Cornelia Klein) showed huge potential for the future and stood out in the trot work with his beautiful transitions. The walk was clear and ground covering, the canter showed good differentiation in the collected and medium work but was a bit low in the shoulder. The scores for this combination were 8.4 for trot, 9.0 for walk, 8.2 for canter, and 8.5 for submission and overall impression. The total was 8.52, good for the silver medal.

The young Juliane Brunkhorst said, "I can hardly believe this. I came here with no expectations and never thought it would be possible for me to win a medal."

A delightful surprise was the French Jessica Michel winning the bronze medal. Year after year, the Germans and Dutch have dominated the World Championships and it was a relief to see a rider from a smaller dressage nation storming to the top and taking the spotlight on her own account with fantastic dressage.

Aboard Mrs Dallara's Oldenburg bred mare Noble Dream (by Caprimond x Donnerhall), Michel scored 8.34 in total which ranked her third. The mare is a very elegant, light footed mover and the rider was able to keep a super light, soft contact the with the bit that was truly a text book example. 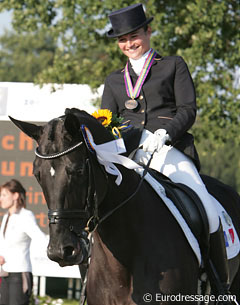 The trot was balanced and in a good tempo but the hindlegs could engage a bit more towards the gravitional point underneath the body. The walk showed efficient use of the entire body and was ground covering. The canter work was high quality but the mare became a bit tight at times. The judges awarded her 8.2 for trot, 8.8 for walk, 8.2 for canter, 8.0 for submission and 8.5 for overall impression.

Michel was ecstatic about her bronze medal. "I'm very happy to be here. My goal was to qualify for the final and with this medal I believe I achieved much for France. I'm happy for the mare, the owner, myself, and especially for France," she said.

One of the revelations of the show was the Danish warmblood mare Polka Hit Nexen. Under Dorthe Sjobeck Hoeck, this mare probably showed as much world class potential as Cayenne W but a few mistakes in the ride resulted in a "medalless" fourth place.

Polka Hit Nexen, by Sandro Hit x Templewind xx, is a thoroughbred looking mare with long legs and a super refined conformation. She's owned by Berit Nielsen and bred by Hans Jul Andersen. She has a world class trot, but in the finals, the contact with the bit was unsteady and the mare was not always entirely through.

The walk was superb, with three hooves over track. Unfortunately, there were few issues in the canter. The transition to canter was not over the back and there was loss of rhythm when the mare knocked her hind legs against the white boarding of the ring. Towards the end of the ride, there was some tension and Polka Hit did not truly stretch into the contact during the posting trot with long reins. Despite these issues, the mare is absolutely phenomenal and a real star for the future. 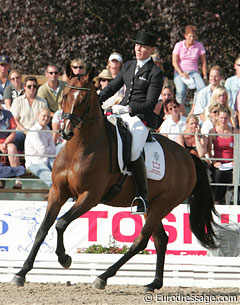 Hans Peter Minderhoud and the sympathetic Hanoverian stallion Roosevelt, owned by Reesink Horses and Fritz Kundrun, landed a fifth place. The dark bay stallion by Rotspon x Lauries Crusador xx improved was in excellent form in the finals moving with more bounce in the trot work but the engagement could still be improved. The canter work was very good though one simple change was hesitant and the horse sometimes came behind the vertical. The judges especially liked the trot work praising it for its fantastic, uphill rhythm. The walk shows huge over track and Clarke believed it would not be "so easy to collect" it. The canter was in good balance but could have been more off the ground. Clarke commented that for submission they scored 7.2 because the horse dropped slightly from the vertical and the horse had to take the contact more forward. Nevertheless, Roosevelt was less "ponyesque" than on Thursday and moved with much expression in the finals. He scored 9.0 for trot, 7.9 for walk, 8.4 for canter and 8.2 for general impression. Total = 8.22 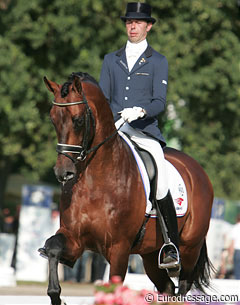 Two Dutch horses tied in sixth place: Vivaldo and Johnson. By winning the consolation finals, Mirelle van Kemenade and the KWPN stallion Vivaldo (by Polansky x Montecristo) were able to ride the finals. The dark bay stallion improved in the competition and showed some lovely movements on Saturday. There was still some minor tension in the horse, who regularly neighed in the ride, but he showed a lovely, expressive trot tour with good activity and bounce. The walk was ground covering and the canter was uphill, well suspended and with much balance (also in the counter canter). At one moment, Vivaldo lost the canter because he neighed but in general the ride was smooth and expressive. The pair scored 8.7 for trot, 8.5 for walk and canter, 7.0 for submission and 7.9 for general impression. The total was 8.12.

The same total score was obtained by Hans Peter Minderhoud and the KWPN licensed stallion Johnson (Jazz x Flemmingh). Johnson is a fantastic horse with three gifted basic gaits but there was some tension in the ride. The trot was active, rhythmical but the hind legs could be more engaged under the body. The walk was tense and did not show sufficient over track and clear rhythm, moving a bit long-short. The canter is absolutely delightful and the judges stated that it was "the best canter all day, uphill, light, and expressive," but some technical errors took place. The simple changes were tense which showed in the swooshing tail and the horse was regularly against the hand which showed in him pushing up the head sometimes too much, which he couldn't hold and then tipped behind the vertical. Despite these issues, Johnson is a super horse and a real talent for the future. The judges acknowledged that too and scored him 8.4 for trot, 6.8 for walk, 9.2 for canter, 8.0 for submission and 8.2 for general impression.