Vivaldo Redeems Himself in the 5-year old Consolation Finals 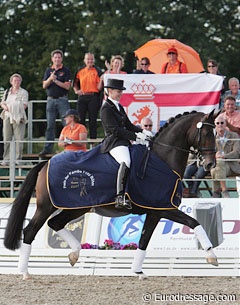 The KWPN licensed stallion Vivaldo and rider Mirelle van Kemenade-Witlox took their chance for redemption by winning the 5-year old Consolation Finals at the 2007 World Championships for Young Dressage Horses in Verden, Germany, on August 3, 2007.

The pair had a dramatic qualification ride as the super talented bay stallion (by Polansky x Montecristo) did not show off his top quality gaits being totally tense, unfocused and unresponsive to his riders aids. They finished last with a 5.90 in that class, but got a chance to make it all right in the consolation finals. And that's what they did!

In the consolation finals on Friday afternoon, Van Kemenade was able to keep the lid on the cooker and, though Vivaldo was whinnying occasionally during his ride, he stays alert to his rider's aids and did not panic in the impressive WM-ring. Van Kemenade was able to sit properly during this ride -- no longer were her legs stretched forwards like stiletto's and her hands high in the air to control the head -- but her seat was more relaxed and she followed the movements of the horse. Vivaldo, who is owned by his breeder TH Mr. van Brenk and stallion station Van Bommel, showed a very lightfooted and elastic trot and a canter with a lovely moment of suspension. The walk could have been more ground covering but improved on the second diagonal in the extensions. There was a small hiccup in the rein back. The judges scored all three gaits 8.5 and gave the combination an 8.0 for submission and 8.4 for overall impression. Their total mark of 8.38 strongly put Vivaldo at the top of the leader board as sole horse to score above 8 in the consolation finals. 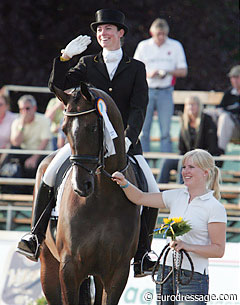 The talented young Grand Prix rider Pernilla Andre became the runner up in the consolation finals. Aboard the Swedish bred Wennica (Longchamp x Warkant), Andre scored 7.96 in total. The huge mare, bred and owned by Stuteri Stubbang, is not the fastest mover behind but her balance and clear rhythm are exemplary. The contact with the bit was light, steady and correct in all three paces and Andre was able to execute a lovely, flowing test that earned a score high enough to ride in the Finals on Saturday.

The Australian Maree Tomkinson tied in second place with Andre on a score of 7.96. Her Oldenburg mare Diamantina (by Diamond Hit x Campari M) is a real beauty queen and charms the crowds and judges. She is not yet very strong in the hind legs but is a graceful mover and Tomkinson tried hard to let the mare's natural talent for dressage appear in the ring. Owned by Howard Sultana, Diamantina's strongest gait was the canter with a fantastic bounce and superbly engaged hind leg. The second place gave Tomkinson and Diamantina a ticket into the individual finals as well.