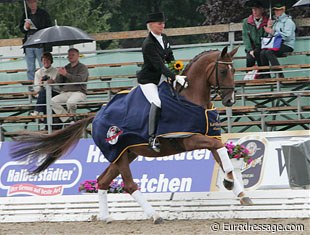 Brigitte Wittig and the Hanoverian mare Blind Date won the 5-year old qualification class at the 2007 World Championships for Young Dressage Horses in Verden, Germany, on August 2, 2007. The chestnut mare scored an overall mark of 9.10 and led a field of 37 five-year olds

that are competing at the Championships this year.

Everyone was praying for lovely summer weather and while it stayed dry for a short while in the morning, almost all competitors had to suffer misty rain during their ride. Once again, the WCYH show ring has been relocated back to the center of the Verden show grounds as the WCYH competition had to give up its beautiful stadium for the CSI show jumpers. Bad weather and a lackluster show ring did not damper the spirits of the crowds, which flocked together in the big white hospitality tent, and in general many lovely horses presented themselves in the ring. One peculiarity stood out this year in the 5-year old division and that was "Girl Power". 16 of 38 horses were mares and of the eight top placed horses, which received a ribbon in the award ceremony, five were mares!

It was Blind Date, however, who took highest honours. Bred by Margret Klare and owned by Wolfram Wittig, this chestnut mare (by Breitling x Donnerhall) excelled in her rideability and three outstanding basic gaits. Her trot work was light, engaged and well suspended, though the mare could have had moved a bit more freely from the shoulder. The walk was delightfully relaxed and ground covering and canter showed fantastic suspension and power but the hind leg could have flexed some more in the hock. Especially the light, steady contact with the bit was praise worthy in this combination. The judges rightfully awarded her 8.60 for the trot, 9.20 for the walk, 8.80 for the canter, 9.50 for suppleness and submissiveness and 9.40 for overall impression. This totaled an average of 9.1 which deservedly earned her the victory. 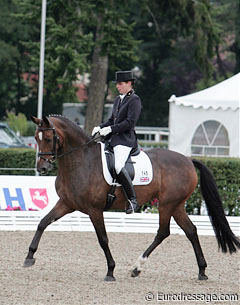 Placing second was the Westfalian bred mare Cayenne W. Bred by Mr Wittig and Mr Tiemann, owned by the Japanese Akemi Tanaka and ridden by the British Susan Pape, this mare is by Carabas x Bismarck. Her highlight gait was without a doubt the walk for which she scored an undervalued 8.4. In the trot, the mare showed much lightfootedness, self carriage and engagement. Pape had a lovely light, steady contact with the bit and especially when the reins were lengthened in the rising trot, the mare gave a very relaxed and balanced impression. She scored 8.0 for her trot. The canter was nice with a good hind leg but could have been jumped rounder over the back. The 8.6 canter score might have been a bit generous, but the judges were right in awarded her 8.8 for suppleness and 9.0 for overall impression. Their total mark was 8.56.

Third place went to the Oldenburg stallion Revanche de Rubin. Second to go in the ring, this bay stallion by Rubin Royal x Landadel was generously marked even though he is a lovely dressage horse. Ridden by Juliane Brunkhorst, the stallion has a lovely silhouette and is naturally uphill. He showed good extensions in trot and canter. In the extended walk he could have covered more ground and especially in canter, he should have jumped more over the back. The judges were generous in scoring the horse's canter 8.8 but were quite on the dot with their other marks. Brunkhorst and Revanche (named "revenge" by his breeder Harli Seifert because the horse was not licensed as a stallion) placed third with 8.42. 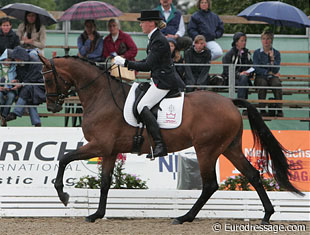 A mare which should have placed much higher -- let's say second behind Blind Date because she made one mistake in her test-- was the Danish warmblood beauty Polka Hit Nexen, by Sandro Hit x Templewind xx. This highly noble, refined mare was one of the sensations of Verden. This bambi-beauty has long legs and moves like a model on the catwalk: elevated, active, lightfooted. A small spook in the serpentine put some tension in the rider but Dorthe Sjobeck Hoeck kept everything well under control. The walk was world class, loose, relaxed, ground covering and in a clear four beat rhythm. The canter work was uphill and active. The contact with the bit could have been a bit more steadier, but in general Polka Hit was absolutely one of the stars of the class. The judges gave a very meager 7.9 for the trot, and then 8.7 for the walk, 8.2 for the canter, 7.8 for submissiveness and 8.2 for overall impression. The total mark was 8.16. Polka Hit's owner Berit Nielsen was hunted down on the show grounds by all the big German (and international) horse dealers who were interested in selling her mare. However, Nielsen's replay was a clear "nej, not for sale."

The best placing Dutch warmblood horse was the KWPN and Oldenburg licensed stallion Johnson (by Jazz x Flemmingh). Under Hans Peter Minderhoud this quality horse showed some lovely gaits, but the ride was not entirely smooth. The rider's aids were often rough and the horse was put under much pressure to excel in his movements, which led to an inconstant contact with the bit. Johnson, who is a former KWPN licensing champion, regularly went behind the vertical. The bay stallion does move with much expression and his trot is engaged with much push. The first diagonal in walk showed little overtrack but it improved slightly on the second diagonal with two hooves overstep though the head of the horse was unsteady. The canter work was decent but not brilliant and the 9.0 score for the canter had to compensate the 6.8 mark for the walk. The trot earned an 8.2 and the overall mark was 8.08. 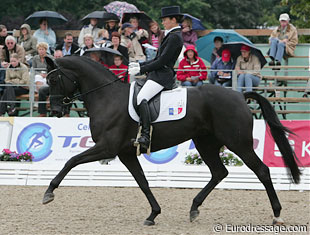 The sixth place was obtained by the French rider Jessica Michel with the black Oldenburg mare Noble Dream (Caprimond x Donnerhall). Bred by Claus Fenske and owned by Mrs Dallara, the black mare is not a beauty queen because of her slightly croup high top line, but she is an elegant ladies horse which is soft in the mouth and moves with good balance. The walk was nicely relaxed with two hooves overtrack and the working canter was a bit stocky (Caprimond like) but in the extended canter she moved with more engagement and expression. The lightness and naturalness of this combination earned them a 8.04 total score.