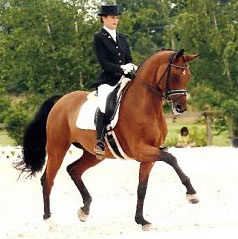 The French Equestrian Federation has announced the names of the three French owned horses which are selected to compete at the 2007 World Championships for Young Dressage Horses in Verden, Germany, August 2-5, 2007.

Following a final selection trial at the CDI Vierzon, July 12-15, 2007, judged by Peter Holler, Katy Amos Jacob and Bernard Morel, the following horses have qualified to compete in Verden:

At the CDI Vierzon, Noble Dream, who was champion of France in 2006 in the 4-year old division, won the 5-year old FEI Young horse test with 81.60%. The winner of the 6-year old class was Jessica Michel aboard Riwara, scoring 82%. Jean Michel Aubry and Ulan landed a second place with 73.40%.