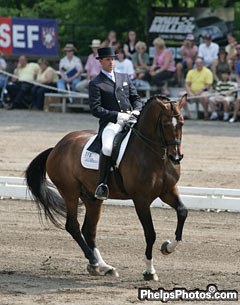 The first day of the Collecting Gaits Farm Dressage Festival of Champions -- the 2007 Ameircan Dressage Championships -- got off to a chilly start on June 14, blankets and jackets were the most sought after on the grounds of the US Equestrian Team Foundation Headquarters

The first sighting of the potential Pan Am riders took place before the lunch break and the preparation by the riders was evident in their performances. Christopher Hickey (from Colora, MD) and the 9-year old Dutch Warmblood gelding Regent marched into the ring first, took control of the test, and never looked back. They were awarded a score of 71.5%, which held throughout the entire class.

“I had a lot of reservations about going first,” said Hickey. “It doesn’t matter if you win the qualifier and if you come in the number ranking one spot, when you get to Gladstone everyone comes in on an even level playing field. There’s a lot of really good horses and very experienced riders that deserve to be here. If you’ve gotten yourself here you have to have faith you’re doing something right.”

No one could touch Hickey’s score, but local rider, Lauren Sammis (from North Orange, NJ) and her beloved 8-year-old Dutch Warmblood Sagacious HF (owned by Hyperion Farm) had a virtually mistake-free test to also break the 70% mark finishing up on 70.15%. A spectator at the Festival of Champions in the past, 2007 marked the first chance for her to compete and Sammis was honored by the opportunity to bring her horse to the venue.

“It’s certainly nice being on the inside of the ring instead of on the outside,” said Sammis. “I’m so, so lucky – lots of my friends and family are here. I ride the horse every day like I’m just lucky to be on him. I’m so proud of him and so excited for people to see him. He’s just that nice of a horse. The show and the judges are nice but riding that horse around, for a rider, that’s what it’s all about.”

Sagacious HF has propelled through the dressage ranks at a rapid pace, he was competing at training level just a year and a half ago.

“He’s got his head on straight and he comes down the center line and he’s relaxed all the time,” said Sammis.

Rounding out the top three in the Prix St. George was veteran rider, Shelly Francis and Dominion. A 9-year-old Hanoverian gelding, Dominion’s power and strength were evident throughout his work. When asked about the possibility of a Pan Am Team spot for Dominion, his rider was realistic.

“I hadn’t given it a lot of thought, I’ll do it if I get the chance,” said Francis. “But there are two more classes to go.” 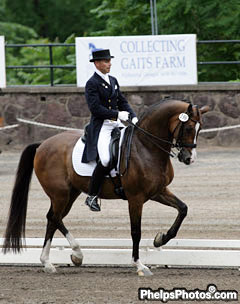 The big guns rounded out the first day at the Festival and there was not a standout test throughout the first two-thirds of the Grand Prix. Kristina Harrison-Naness held the lead for most of the division until Steffen Peters cantered into the ring meaning business with Lombardi and didn’t give a point away.

Solid passage, a defined and very supple walk (which scored straight eights) highlighted the test along with fluid changes, plenty of animation and very accurate riding (again scoring straight eights) pushed Peters over the 70% mark with the 16-year-old Holsteiner. Hailing from San Diego, CA Peters has been a mainstay of the US dressage program for two decades.

Owned by Akiko Yamazaki, Lombardi excelled in the half-passes but Peters felt that his transitions from the walk to the passage was flawed.

“It was a good wake up call for the rest of the weekend,” said Peters. “I just trusted him a little too much. There’s a fine line with him though between waking him up and keeping his trust. He’s opinionated and sure of himself.”

Three riders finished within a percentage point of each other, filling the second through fourth spots. Harrison-Naness held on gamely to her runner-up spot with a 67.958%, Michael Barisone and Neruda slipped into third on a 67.458% in a test highlighted by a nine for the passage and Jane Hannigan with Maksymilian, who followed Peters into the ring, had to settle for fourth on 67.292%.

Harrison-Naness, also from California, riding the 12-year-old Andalusian stallion Rociero for Margaret Carrera was thrilled with her horse’s performance.

“I feel so passionate about this horse,” said Harrison-Naness. “There’s something about him.”

Harrison-Naness felt that the small Andalusian, the only one in the competition was looked down on by some judges when he first got to the Grand Prix level, now however, she feels like he is taken seriously.

“He is the biggest lovebug,” said Naness of the stallion. “My daughter handles him he is the nicest horse to handle. He’s the best.”

“He is as honest as the day is long,” said Barisone. “I rode the changes wrong, I can’t adjust on that horse. I missed, it was totally my fault. When I’m clear and don’t change my approach he can do it. The horse is wonderful. I’m in third place due to no fault of my own.”

Harrison-Naness and Barisone both praised Peters’ reputation and ability to focus in the ring.

“As an up and coming rider, I’m just honored to be second to him,” said Harrison-Naness.

Barisone envies his focus and ability to put in a clean performance.

“Steffen is an example,” said Barisone. “f you go in there and don’t do make mistakes on a quality horse you will get the results. “

Peters explains it a little differently, “I’m not very good at multi-tasking but I can do one thing really well. I can focus on each movement and not the score.”

The Young Riders got the Festival started, performing their team test first thing in the morning.

Hannah Shook and Capetown were the first combination in the ring and put in a very solid performance to grab the early lead on a 66.975% and hold it until more than halfway through the class. Capetown, a former champion event horse (he won Radnor CCI** in 2001 with Clark Montgomery), looked very comfortable in his new vocation. Their score was finally bested by Ashley Schempp and Mowgli who picked up a score of 68.177% two-thirds of the way through the first division.

Two horses later Kassandra Barteau, from Gilberts, IL, and the 15-year-old Hanoverian mare, Gabriella became the only pair to break the 70% barrier with a fluid and relaxed effort, featuring eights on their flying changes. A big hug rewarded Gabriella at the end of her test and Barteau was visibly elated with her seasoned campaigner.

“I couldn’t stop smiling,” said Barteau after scoring 70.177%. “ I’ve been riding her for four years – we started at 3rd level and did our changes together. She’s just a big old happy mare. I did Young Riders’ two years ago and then last year she had a foal. It was a surprise breeding.”

Barteau explained that they didn’t know the mare was in foal, but now a yearling named Sebastian, lives on Barteau’s family farm.

Full coverage of the 2007 Festival of Champions at Horsesdaily.com