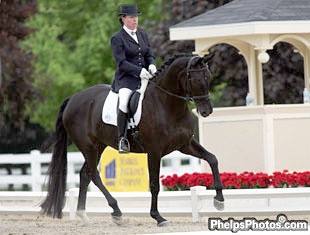 Solaris Hit, ridden and owned by Rebecca Knollman, was the winning horse in the 5-year old Markel/USEF Young Horse Central States Selection Trials at Lamplight Dressage. The pair finished the two days of competition with a total score of 78.08.

The three judges for the competition – Jane Ayers, Janet Foy and Mariel Barnett had many good things to say about Solaris Hit, a Hanoverian mare by Sandro Hit out of Great Rubina which Knollman purchased at the Verden Elite Auction. The judges called Solaris Hit, bred by H. Gisselmann, a “light, elegant, elastic type of horse that has a lot of natural talent.”

They liked her trot for its natural cadence and expression, but noted that the mare needed “a bit more self-carriage.” Those moments when Solaris Hit was in self-carriage the judges called “absolutely wonderful.” Hence, they encouraged Knollman to allow the mare to carry herself and to avoid helping her.

The canter was praised for “being a lovely, uphill gait with a lot of natural balance and scope.” The judges praised the medium canter for being very straight and being “nicely uphill for a five-year-old.” They also felt the mare showed the ability to collect well in her downward transitions and in the simple changes.

It was in the walk that judges noticed the most tension in Solaris Hit, telling Knollman that in their view the mare appears rather tense in the walk when on the bit and needed more activity and reach from behind. There was a difference, however, when the reins were lengthened and the judges commented that “once the reins lengthened, she was quite good in her rhythm. And she had much more ground cover.” Overall, Knollman was told that Solaris Hit “has a wonderful work ethic and a very correct start with her training.”

Second in the Five-Year-Old Markel/USEF Young Horse competition was Roccoca WF, a Hannoverian mare by Rienzi out of Turtletaubchen. The mare was ridden by Verena Stock and is owned and bred by Vanessa Carlson of Claremore, Oklahoma. The pair’s final score was 73.20 percent. In third was Anna Burtell with her Dutch gelding Valentino, by Kennedy out of Funera, with a score of 71.60 percent.

Louisa Eadie and Welt Cup were the lone pair in the USEF/Markel 6-year old competition, but what a lovely pair they were. They traveled quite a distance to compete having come from Millbrook, New York. Eadie came alone on the 24-hour journey. “Just me and the horse,” she said. The judges rewarded their trip with a total score for the two days of competition of 71.28 percent.

The panel of judges had many good things to say, telling Eadie that Welt Cup’s trot was “a lovely, rhythmic trot that keeps the same tempo very nicely in the medium trot while still gaining ground.” All it needed, they said, was a bit more elasticity.Of the canter, judges were as pleased with that as they were with the trot saying what tension they say in the canter seemed to be a result of Welt Cup “not being 100 percent comfortable with the changes.”

It was the walk where judges “found a few difficulties with the rhythm and relaxation, especially with the contact.” The panel of judges told Eadie that “when you let the neck out and let him stretch, the rhythm did improve but overall, it could show better rhythm, more elasticity and more reach.”

Overall, the judges told Eadie that she and Welt Cup, owned by Judith Sloan of Roseview Dressage, had the potential to go places saying that “we really like the type, we like her gaits and we think she has a really good future.”

Read the full story with photos at Dressagedaily.com