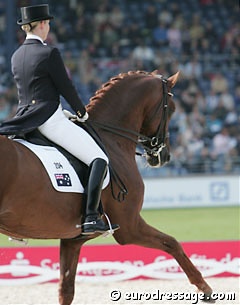 Ralf Isselhorst has commenced his role as Australian National Dressage Trainer by travelling to the Wiesbaden CDI*** in Germany to observe and work with the Australian Dressage Squad riders and their trainers.

The Equestrian Federation of Australian reported that Ralf’s presence in Wiesbaden and the support and feedback he gave was well received by the Australian riders. Although most are well-established with their own trainers, Ralf’s assistance made a difference as all of our riders work towards attaining their Olympic “Minimum Eligibility Standard” (MES).

There were some very encouraging results leading up to next year’s Olympic Games. Germany-based Australian Dressage rider Kristy Oatley rode three horses at this year's Wiesbaden Pfingstturnier (Whitsuntide weekend), doing well in all classes she entered. The highlights certainly were her win with Quando-Quando in the Grand Prix Freestyle and her third place with Don Bolero in the Grand Prix (for the Special). Peter Weston rode Winslow in the same classes as Quando-Quando but with more moderate success, though Peter Weston achieved half of his MES qualification. The combination did, however, get a qualifying score. Kristy's cousin Lyndal competed with Feramo in the "small tour" (Prix St. Georges/Intermediate I). Unfortunately, Matthew Dowsley had to withdraw Cinderella, who was experiencing fitness problems and probably has not recovered as well from her operation as had been thought.

The first opportunity for our Australia-based riders to work with Ralf comes in June when the first of three clinics scheduled for this year will be held. This clinic, to be held at Glenorie at the outskirts of Sydney, will take place 27 June – 01 July. Interested coaches and media are welcome to attend these clinics by arrangement with the High Performance Manager through the EFA National Office.

Following the third clinic in October, National Squad Riders, the High Performance Panel and Ralf will review and assess the success of these clinics.