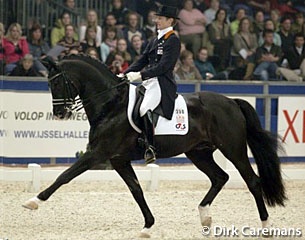 As Dressage riders were preparing to travel to the Rolex FEI World Cup™ Final, Dutch star Edward Gal had a few things on his mind. "I wonder if I will get the same reception as I did the last time I was in Las Vegas," he mused, "because that was the most amazing experience...."

The 37-year old rider last competed in the Thomas & Mack Arena in Las Vegas two years ago and it was an occasion he will never forget. The American audience simply could not contain their excitement during his Grand Prix test with Lingh and burst into spontaneous applause - not quite the done thing if the usual etiquette surrounding the sport of Dressage was being observed. "It was such a surprise!" Edward explained. "Usually when we are competing in Europe the spectators will wait until the rider has completed the final halt and salute, but every time I asked Lingh for extended trot the crowd started clapping wildly and it was so beautiful. You could feel that the audience was loving it, and Lingh was loving it too!"

Edward won the Grand Prix that day, but had to settle for second place overall behind Anky Van Grunsven and Salinero in the final analysis just as he had done at the Final in Düsseldorf one year earlier. The recent birth of her second baby is keeping Anky at home this time around however so, with her out of the picture, who will be his strongest opposition? "Well, Isabel Werth of course" Edward said, "she will be the firm favourite and then there is Andreas Helgstrand with the grey horse Blue Hors Matine and Imke (Schellekens-Bartels) - she also has a good chance".

Edward's horse for the 2006/2007 final will be Gribaldi and he has high expectations - "if I didn't think he was good enough I wouldn't be going," he pointed out. "I know he can do it - but he just has to do it at the right moment" he said. However one thing does concern him. "It will be Gribaldi's first time in a plane and I just hope that he will be OK," he commented just a few hours before the horses were due to fly out from Amsterdam in the early hours of Saturday morning. "He has no problem travelling in the truck, but being a stallion he could get worried by the horses around him on the plane". However he expected that Gribalidi's normal attitude would overcome any anxiety he would be experiencing - "he's an extremely independent horse" he explained. "When he is at home he likes peace and quietness and to be left alone. He likes to do things his own way and he is the same when you are riding him too. You don't TELL him to do anything - you just need to ASK him - nicely....." he added.

So if he gets the same response from the crowd as he did in 2005 how will Gribalidi react? Will the black stallion lose concentration and spoil all the hard work and preparation? He didn't think so....."most of the horses at this level of the sport are used to a lot of noise and pressure and the good ones know when the audience is behind them. Some horses respond to tension and excitement by becoming more elevated and expressive in their movements and my horse is a real show-master - he should love it". So no need for the Las Vegas audience to hold back then if they like what they are seeing? Even if it's not quite the "done thing" elsewhere? "No, not at all - I think it's great if people enjoy what we do because then we must be doing it well!"