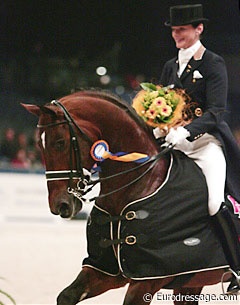 Yesterday evening, the withdrawal of Dutch combination Laurens van Lieren/Hexagon's Ollright from the 2007 World Cup Finals in Las Vegas, became known. The pair will be replaced by the first reserve rider, the Dutch Marlies van Baalen on Kigali.

"Marlies qualified both Relevant and Kigali for the reserve spot for the World Cup Finals. Now that it's definitive that Marlies will participate in the Finals, she has chosen Kigali as ride. This fits best in the planned show schedule of both stallions," Van Baalen explained.

Van Lieren's Hexagons Ollright, who did not compete at the CDI-W 's Hertogenbosch because of a minor injury, has not yet recuperated and the vets recommended him not to go. "I'm not really disappointed about not going to Las Vegas, no matter how great the show is," Van Lieren told the KWPN society. "I'm more surprised and shocked that injury is more serious than I thought and the far journey is too big a risk. My horse and I are actually too young to be dealing with health issues so regularly. Fortunately I can do some light trot work now, besides walking. Ollright is feeling really fit. Hopefully the scan in four weeks will prove that we can be a strong combination during the outdoor season."