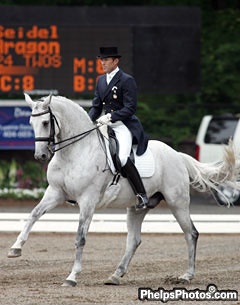 Guenter Seidel and Aragon, one of the strongest contenders in the U.S. League Finals for the 2007 World Cup, have withdrawn from competing in the finals. The grey Bavarian gelding by Abydos passed the FEI vet inspection, but went lame in the training session after the jog.

"Aragon injured himself while schooling after he had passed the vet check. He will be going home today for our vet to evaluate him and we will know more in a few days," Guenter Seidel told Eurodressage.

Seidel also had to deal with a second major blow this week. His small tour horse Princeton, a 9-year old Westfalian gelding by Popcorn x Weinberg, foundered and had to be brough to the equine clinic.

"Princeton came down with laminitis last week is is currently treated at the Alamo Pintado clinic," Seidel said. At the moment, Seidel has to wait patiently for Princeton to recover. 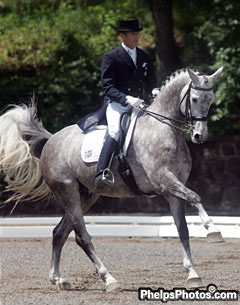 The U.S League Finals are taking place this weekend at the Festival of the Horse CDI-W in Burbank, California, U.S.A. Seidel and Dick and Jane Brown's Aragon were considered one of the top American candidates for Las Vegas.