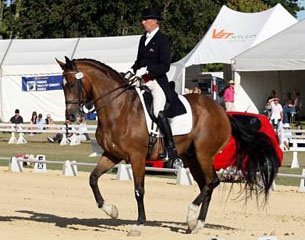 Bill Noble & Vincent St James won their third consecutive Horse of the Year Grand Prix title at the Kelt Capital sponsored event in Hastings NZL, March 14-18, 2007. The horse was a little overcome by the huge atmosphere on the first two days, and had to settle for second behind Jody Hartstone and her twenty year old stallion Landioso in both the Intermediate II and the Grand Prix. However "Vinnie" was much more settled in the Kur.

Owner/rider Bill Noble was just thrilled with the horse - his wife Felicity said "he used to be such a shy horse, but now he's getting so much more confident in both the work & his attitude - he's turning into a bit of a tiger !" Bill has always believed in the ability of the horse and has waited patiently for the horse to develop the Grand Prix work - this patience is now being truly rewarded. The horse simply could not contain himself at the prizegiving ceremony - piaffing in time to the clapping of the 5,000 plus spectators in the stand who could witness the Kur prizegiving on the big screen situtated in the next door showjumping arena.

This event offered the biggest prize money ever for any dressage event in NZ and the organising committee laid a special all weather surface on top of the grass which was truly appreciated by the dressage riders.

Sarah Morgan and Great Gatsby from Auckland were again victorious in the CDI-YR, repeating their Taupo win from two weeks ago

Thanks to support from Cathay Pacific airlines, the Kelt Capital Horse of the Year Show hosted two international dressage derbies on borrowed horses, featuring none other than Jessica Werndl & Matthias Rath who flew in especially from Germany to compete against riders from South Africa & NZL.

The next day, riders had to ride a Freestyle to Music on a different horses. The riders had the opportunity to observe each horse perform it's own freestyle and were given a copy of the music to listen to. They then had the choice of creating a new choreography or copying the original. NZL again won the Individual with Coralie Williams scoring a great 66.14% on Sally Field Dodgson's attractive grey Anamour (hanoverian ) mare Amberleigh Elite . Jaco Fourie did well to finsih second on Tracey Smith's Adagio C (also by Anamour) - heavy rain fell during the test and technical difficulties occurred with the music - in fact it was also the wrong music so he just improvised for an incredible 64.11 under trying conditions. ! And if all that wasn't enough the he had to ride in a borrowed tail coat after the local laundry managed to shrink his beyong recognition ! Team mate Calet de Vos was third putting South Afica into second team position on 125.57 behind NZL on 126.459 and both ahead of Germany on 117.136