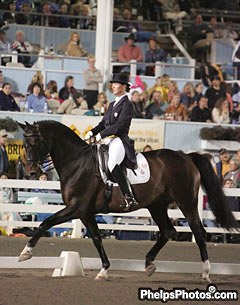 Equine Canada announces that on March 21 the Sport Dispute Resolution Centre of Canada released a binding decision on the complaint lodged by Canadian Dressage rider Evi Strasser of Saint-Adele, QC. The complaint was in regards to the Dressage Canada Selection Committee's decision to allow an exemption from the published criteria for fellow Dressage rider Jacqueline Brooks.

The exemption effectively allowed her to compete in the Canadian League Dressage World Cup Final held November 8-9, 2006, at the Royal Horse Show in Toronto, ON.

In early October, Brooks applied to the Dressage Canada Selection Committee for the Canadian World Cup Final for an extenuating circumstance exemption from the requirement to have competed in two Canadian CDIs if such CDI’s took place within 1600 kilometers of the rider’s residence within the qualifying period.

The two CDI's in question were Ottawa and Blainville. Because Brooks resides outside Toronto she was required to compete there. Had she lived in Vancouver she would not have been. Ottawa and Blainville were the same CDIs designated as the Canadian Trials for the World Equestrian Games. The WEG trials were cancelled because unexpectedly only five horses/four rider combinations qualified. Had the trials not been cancelled, meeting the 1600 km requirement for the World Cup Criteria would not have been a problem. The same two competitions would have counted for both.

Since the WEG trials were cancelled, the WEG team riders had an option to re think their competitive training plans for their WEG horses. Jacqueline decided to rest Gran Gesto to help him peak in Europe and hopefully at WEG. She understood that she could apply for an exemption from Clause F6j under clause G8 of the World Cup Criteria Canadian League Final which addresses extraordinary circumstances. She did apply to the World Cup Dressage Canada Selection Committee in early October and was granted the exemption.

The Sport Dispute Resolution Centre's decision effectively overturns the decision made by the Dressage Canada Selection Committee in October 2006, and as a result of the Arbitrator's binding decision, allowing Strasser's complaint, it was determined that Brooks was not eligible to compete in the Canadian League Dressage World Cup Final, therefore, making Strasser the declared winner.

“Like all members of the Canadian Equestrian Team, I rely on the expertise of team selection committees," Jacqueline Brooks told Eurodressage. "I am extremely disappointed that the decision of the Dressage Canada World Cup Selection Committee that was confirmed by the three member EC Appeals Panel, was overruled by the arbitrator. When something like this happens, it is hard to hold on to your faith in the process.”

Fortunately, Brooks is already looking ahead and will continue training Gran Gesto for future international competitions. Furthermore, she is preparing her young horse Balmoral to achieve the goal of making the Pan American Games trials this summer.

“I refuse to lose faith in my sport, or my horses or the family and friends who have supported me these past four months,” Brooks said.

As the winner of the Canadian League World Cup Final, Strasser is now eligible to represent Canada at the Dressage World Cup Finals, scheduled to be held in Las Vegas, USA, from April 19-22, 2007.