Matthew Dowsley To Prepare for Las Vegas at Jurgen Koschel's 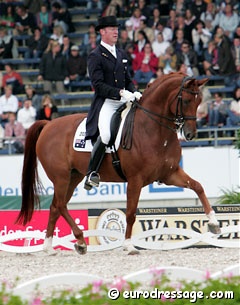 and have travelled to Europe for some fine-tuning before heading to Las Vegas in April.

"Our flight Sydney-Amsterdam was quite an uneventful one, thank God," Dowsley wrote. "Everything went smoothly, all horses ate, drank and coped extremely well with the length of the trip. It took 40 hours from stable to stable. We arrived at Mr Koschel's place approximately 10.30 pm on Wednesday evening [Feb 14]. The horses settled in well. We have just been walking them twice a day for 30 minutes. The facility is absolutely first class and the hotel we are staying in for the time being is extremely comfortable."

Matthew and his Verden Auction horse Cinderella (by Carbid x Werther) will now train with Jürgen Koschel and the combination will try to get entry in some local events before their trip to the USA. Dowsley also received a wild card for the final Western European League World Cup qualifier in 's Hertogenbosch, The Netherlands, March 22-25, 2007.