No Stopping Jan Brink and Briar at 2007 CDI-W Goteborg 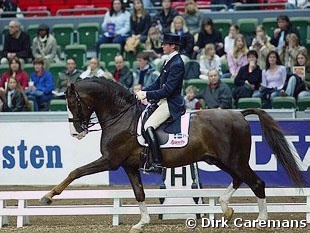 No snow and heavy weather could prevent the knowledgeable and enthusiastic audience of 10,800 people in the Gothenburg Scandinavium Arena to cheer as loud as could be for Swedish favourite Jan Brink and the great 16 year old stallion Briar.

Jan Brink did a wonderful Freestyle with a fresh and happy Briar. His first passage was rewarded with the mark 9 and the piaffes were very good as well. Jan Brink blamed himself for the mistake in the one tempi changes today. “Yesterday in Grand Prix I went for relaxation and a harmonious ride. Today I liked to show more power and I just corrected too much with my outside leg in the changes. A pity, but the most important is that Briar felt this motivated! As long as I can keep it this way, I am a happy rider”, Jan Brink commented.

Standing ovations also for the runner up Finnish Kyra Kyrklund, who was definitely welcomed by the audience as their ‘lost daughter coming back home’ now when she is living in Great-Britain a few years already, after having spend a long time in Flyinge in Sweden. Last Sunday Kyra Kyrklund competed in Neumunster, now in Gothenburg. “This was a try out, competing in this sequence, to witness the reaction of Max. But the Freestyle in Neumünster and the Grand Prix and Freestyle now in Gothenburg were no doubt our three best tests ever! After the Grand Prix in Neumünster last week, Max has not made any mistake in those three tests, remarkable. I am too happy”, ‘lost daughter’ Kyra Kyrklund said.

A lot of Swedish competitors rode to their advantage at home soil. Solos Carex partnered by Tinne Vilhelmson showed a wonderful trotting part and reached third position, her highest in the World Cup™ so far. Louise Nathhorst was partnered with Isidor this time, a son of her Guinness. An inspiring moment was the last extension at the center-line, leaving only one hand at the reigns. Swedish judge Gustav Svalling was a happy man with the fresh Swedish partnerships coming up. “Solos Carex is one of my favourites. Now when he is gelded he is much more cooperative. When he grows in energy, he will be one of the new pillars of the Swedish team. The same counts for Louise Nathhorst partnering Isidor. A little more stabilized and it will be an anchor too, I’m sure”, he commented.

Chairman of the judges Japanese judge Furuoka was thrilled and nervous to be the chairman for the first time in an official World Cup™ Qualifier. “But being nervous only helps to get concentrated. It was a wonderful show with tests with a lot of variation and a great number of spectators”, she commented.

As the snow fall in Sweden has been very heavy and even led to special warnings to stay inside, no dressage competitor will leave tonight from the Horseshow to travel home. They will all be among the spectators to see the jumping and to discuss the possibilities for the World Cup™ Final coming up in April 19-22.

Following nine World Cup™ Qualifiers now only one qualifier is left in Western Europe to qualify for the World Cup™ Final in Las Vegas. Kyra Kyrklund and Jan Brink both think in the same way about competing in the final. Kyra summarizes “The motivation of our horses is precious and the management very important, the more as for the Swedish team Olympic qualification will be the issue at the European Championships in Italy. Decisions to come to Las Vegas depend on how our horses feel short before the final date in April. We’ll see how it goes. Jan Brink adds: “I will definitely come to the last World Cup™ Qualifier in ‘s-Hertogenbosch if I refrain from going to Las Vegas as this is a great show and great audience too, like it is here..

The last European World Cup™ Qualifier will be ‘s-Hertogenbosch (NED) in four weeks.