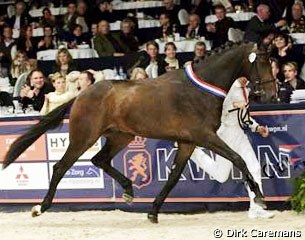 For the second year in a row, a Rousseau offspring took the title of Champion of the 2007 KWPN Stallion Licensing. Last year, Wamberto took the spotlight, this year Zagreb (now named Blue Hors Zack) stood out with his super active basic gaits

and claimed the champion's sash at the end of four days of KWPN stallion licensing in the Brabanthallen of 's Hertogenbosch, The Netherlands.

The champion Zagreb is by Rousseau out of Ibop mare test winner Orona (Jazz x Belisar). He is bred by B. Wilschut and presented by W.L. Plaizier. After the licensing, Zagreb sold in the KWPN Select Sale auction for a record amount of 430,000 euro to Blue Hors Stud in Denmark. 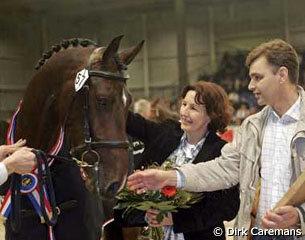 The champion of the show jumpers was Zurich, a Berlin x Concorde offspring bred by A. Floryn from Geesteren, The Netherlands. 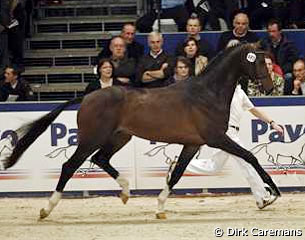 The 2007 KWPN Stallion Licensing committee selected 186 out of 640 stallions for the second viewing in Den Bosch. 90 dressage stallions and 96 jumpers qualified for this second round. 27 dropped out due to veterinary issues. 71 stallions were licensed, of which 35 were dressage stallions.