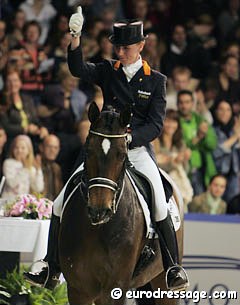 Dutch Imke Schellekens-Bartels, who was already leading the table after winning the two qualifiers of the FEI World Cup™ in London-Olympia and Mechelen in Amsterdam as well was a hot favourite. She did not disappoint the home crowd.

The Dutch national champion showed a brand new Freestyle to music, composed by Dutch virtuoso pianist Wibi Soerjadi. The freestyle called ‘The Spirit of Sunrise’ touched the crowds and judges from the very start.

Imke Schellekens-Bartels was very happy, as her Grand Prix of yesterday did not work out to her advantage. Unexpected mistakes occurred, like canter in the first extended trot, mistakes in the two tempi and one tempi changes and an unwanted change short for a pirouette. After her Grand Prix which was rewarded with the fifth position she had no explanation, after her winning Freestyle she had.

“We have been training technically a bit different lately as the lightness and looseness of Sunrise is improving very much. The shape she is in has never been better, but she obviously got confused in the arena by her own lightness and I in turn got confused too as I did not expect her mistakes and didn’t know how to solve them. Today as I was focused more it all went wonderful. This extraordinary music of Wibi Soerjadi even helps me to control the rhythm of Sunrise and to avoid mistakes.”

The chairman of the judges Francis Verbeek said she and her colleagues really had enjoyed the new Freestyle music. When marking the one tempi changes as the most special part in the music, composer Soerjadi happily raised his hands, as this had been the major theme for him in his composition. “I have been everywhere in the world for my concerts and have given a concert in the great Carnegie Hall in New York. But today here in Amsterdam RAI has been my most exciting experience!”, Soerjadi emphasized. It looks like a new era for Freestyle music has started, not only emphasizing the rhythm but also expressing the character, energy, sonority and beauty in the horse and its movements. “For me as a musician rhythm only is too easy and not a challenge. I like to express all aspects”, Soerjadi explained.

Switzerland’s Silvia Iklé already renewed her Freestyle for the FEI World Cup™ Qualifier in Frankfurt, winning on her very first appearance with this brand new Freestyle composed by famous Swiss composer Bauer and a bandoneon piece played by Zisman. Silvia Iklé was the winner of the Grand Prix in Amsterdam. The piaffe and passage is the strongest point of her great mover and she ad a lot of that of course in her Freestyle. It was hard to decide between Imke Schellekens-Bartels and Silvia Iklé. 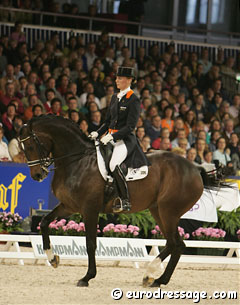 Francis Verbeek commented: “I felt the trotting part and the piaffe and passage were wonderful, but the canter part might have been a bit hectic, in the music too. But for me the first four all were remarkable well performed tests.”

It was a Dutch Party in Amsterdam as Edward Gal, Laurens van Lieren and Marlies van Baalen ended at third, fourth and fifth position. Edward Gal showed the black stallion G4S IPS Gribaldi in what might have been his best Freestyle ever accompanied by the former freestyle music of his sold stallion Lingh. “Now Gribaldi has proved he has deserved his own Freestyle”, Edward Gal promised.

The second Dutch rider to present a brand new Freestyle in Amsterdam was Marlies van Baalen, who asked Anky van Grunsven’s composer Cees Slings of Slings Music Cast, to produce a new Freestyle, called ‘The Wild Wild West’. The Western theme including scores from High Chapparall, Rawhide, Riffleman, Bonanza and Once upon a time in the west accompanied a well ridden test, which brought Marlies her highest marks in a FEI World Cup™ qualifier until now.