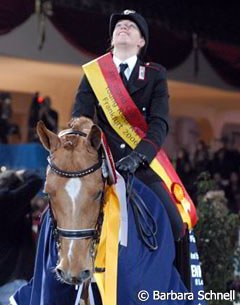 “This Young Riders FEI World Cup™ has been of a high standard”, Mariette Withages commented. I am sure riding in this atmosphere with those crowds will really help to develop our Young Riders for their next challenge, growing to Grand Prix.”

Her next challenge Grand Prix was exactly the thought of winner Italian Valentina Truppa. Aboard Chablis she won the first test, became the runner up behind her European Championships-rival Dutch Lorraine van den Brink in Prix St Georges last Friday and became the winner again today in the Freestyle.

“My next challenge will be Grand Prix and the Olympics!”, the daughter of international judge Enzo Truppa and winner of the European gold medal this year in Stadl Paura bravely expressed, with lots of self confidence. Why not? Her Freestyle could be marked by an interesting choreography, a good relaxation and suppleness and she really rode for the win. Today Dutch Lorraine van den Brink and her horse Murdock, who lacked competition experience the last weeks because of colics, lacked some relaxation and became last of the six pairs in the final. The Canadian participant cleverly went to another show before Frankfurt first and could use her experience to become more relaxed in each test in Frankfurt day by day. “I am sure we sill meet her some day in Grand Prix as well”, Canadian judge Cara Whitham said.