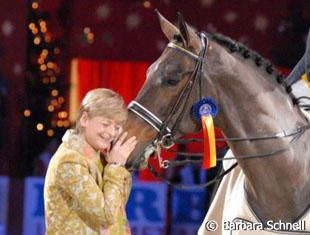 Whoever says that dressage is a boring sport can not have been in Frankfurt this year. The beautifully decorated Festhalle didn't only attract very gratifying crowds, it also saw everything from tears and laughter to outright riot. What a rollercoaster ride!

Looking at result lists on the internet, you won't even get half the stories -- just numbers that in some cases are more than misleading. Isabell Werth's for instance.

It very clearly shows that Polano, while gifted with powerful movements, has been schooled not by her but by someone with lots of muscle and no patience. Unfortunately, now that he's her ride, she has to adapt that style, and the results are sometimes less than satisfyng -- like her 67,833 score in the Grand Prix that was the World Cup freestyle qualifier.

The 66,5 % she scored in the actual freestyle, however, were not entirely the result of a laborious performance, but mostly Isabell's doing because she rode not a double, but a double-and-a-half pirouette and lost points as a penalty. Again, being Isabell, she took it with style. 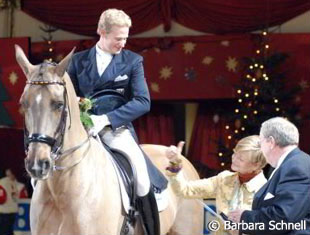 For Mathias Alexander Rath, the event that is very generously hosted by his step-mom Ann-Kathrin Linsenhoff was a disappointment. He placed last with Weltmeyer Junior in the opening test for the Nürnberger Burpokal and showed sportsmanship then by withdrawing the horse, which had been out of training during most of the summer due to an injury, from the finals. In the Grand Prix, he and Renoir Unicef made many mistakes, so that they didn't qualify for the Freestyle. He did get his well-deserved moment in the limelight at the end of a tremendous year, though, when he was awarded his golden riders' badge in the course of a price-giving ceremony.

Carola Koppelmann, who keeps presenting runners-up at the Bundeschampionate year after year, and who does round after round of unrewarded lovely performances in the grand arena, Frankfurt was a moment of triumph. Aboard Comic Hilltop, who only even qualified because another horse had to be withdrawn, she won the prestigious Burgpokal finals, ahead of Dorothee Schneider on Kaiserkult and Helen Langehanenberg on Responsible.

The name of the latter could have been the motto of the winning trio as it presented itself on the podium at the press conference later, because their performance were a showcase for responsible and harmonious schooling of young horses.

The same, alas, cannot be said for Rudolf Zeilinger. While a very elegant and sensitive rider himself, he keeps pushing Franziskus from Grand Prix to Grand Prix. The horse is only eight years, he showed drastic signs of being asked too much of during the whole season, and while the signs have dimmed from outright rearing in Hünxe last April to lots of bad concentration mistakes by now, they are still there, and the judges read them just as clearly as the spectators. The pair placed last in the Kür. 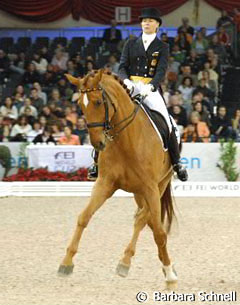 After her triumphant Burgpokal victory two years ago, Frankfurt meant bad luck this time for Nadine Capellmann. In the Grand Prix, Elvis disobeyed her very rudely at the transition to the first piaffe and nearly reared -- just as he did in Stuttgart -- and while he did continue the test as if nothing had happened (even though, curiously, the judges lowered their scores considerably despite the fact that the horse collected himself immediately), the pair had already lost too many points through that incident and placed fifth, barely above the 70% mark. In the freestyle, fate really hit them. While they took of with newfound style and harmony, the music equipment hickupped, and the judges had to interrupt the test for the technicians to fix the problem. Asked to continue where she had left, Capellmann did so, but this time the music got caught in a perpetual loop, so Capellmann withdrew -- through no fault of her own. "I was very much impressed with the way she handled the situation", chief judge Cara Witham said later. "She was very much a lady -- disappointed, but a lady." Regarding the obvious problem in the Grand Prix, Capellmann stated that "it was disobedience, it's no use looking for euphemisms. It was the same in Stuttgart, but I'm aware of it, and we're working on it, and I think that I'm on my way." 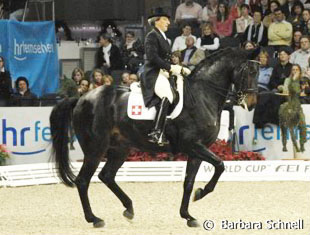 Last, but not at all least, triumphant doesn't even begin to describe what Silvia Ikle gave herself -- and the overwhelmed crowd -- for Christmas. Her passage-piaffe-tours are not of this world, and it's difficult to understand why the judges, after everything they'd already seen, didn't grant her tens for the first piaffe -- only one of them did so, finally during the second piaffe. Still, she won both tests, lots of hearts, and her new freestyle of Latin American bandoneon tunes is tailor-made for Salieri. Again, Cara Witham said it best: "In our vocabulary, we have the ideal of the happy horse -- here we saw it today."

Text and photos by Barbara Schnell