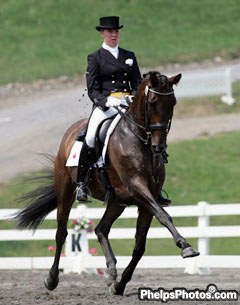 Duncan was identified as the Canadian representative for the World Cup based on her 2006 results at FEI competitions. She will be competing against the top 17 Young Riders from around the world, including Europe, South America, Africa and Asia. Riders will get a taste of truly international, world-class competition during the Final, where they will contest the FEI Young Rider Team, Prix St. Georges and Freestyle tests.

"It’s such an honour to represent your country," said Duncan, who helped the Canada West Young Rider Dressage Team bring home the Gold Medal from the 2006 North American Junior/Young Riders’ Championships, held in Lexington, VA this past August. "I am very excited to go to the Young Rider World Cup, and meet so many different riders. It is such an excellent opportunity for international exposure."

Duncan will head for Germany on December 1, along with her partner for the World Cup, Elektra, her 11- year-old Holsteiner mare.

"Elektra has never been on a plane before, so in addition to training for the competition, I am trying to keep her very fit and keep her weight up," commented Duncan.

Canada took part at the inaugural 2005 FEI Young Rider World Cup Final where Julie Watchorn, of Schomberg, ON, took third place in the consolation round aboard Quintesse.