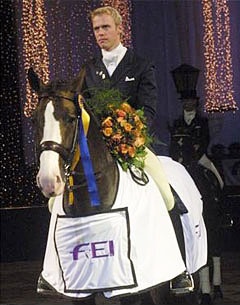 Three Swedes were heading the ranks in the FEI World Cup™ Dressage Grand Prix Kür in the wonderful Globe arena in Stockholm. “Harmony, balance and dance it was what the three Swedes brought their first three positions!”, expressed Swedish international judge Birgitta Bergsten

. Swedish most popular rider Jan Brink (46) and his wonderful moving and proud stallion Briar were heading the Swedish coup.

As the Tollsturp stallion Briar had not been at his best while preparing for the WEG in Aachen, it had been the first goal for Jan Brink to get Briar healthy and fit back in the proper track. “Stockholm proved to me that Briar is better than ever again!”, Jan Brink said convincingly. “In today’s Freestyle he was really alert and going, not tensed at all, with a lot of harmony and expression. I would say, he is back to it’s normal standard! Before the World Cup™ qualifier in Stockholm he did already win five Grand Prix-tests and the Swedish championships in Flyinge. Now while he is real fresh and happy, I feel my management is to keep him this happy solely. He will get it’s rest, we plan to go the Amsterdam World Cup™ qualifier and to Gothenburg. And than we will see where we are and probably do ‘s-Hertogenbosch. Of course the World Cup™ Final in Las Vegas is my plan!”

The Swedish colleagues of Jan Brink did a great job as well. A bigger audience than last year waved and clapped the black stallion Guiness of Louise Nathhorst to third place, the clapping rhythmical accompanied by her Swedish Abba-music. The enthusiastic crowd also raised the hands for Tinne Vilhelmson showing Solos Carex. “It was very difficult to decide between those two, or the next three, also taking the test of German Ellen Schulten Baumer into consideration. Because of the pirouettes which were rather big, she went down a bit”, judge Birgitta Bergsten commented. However, Ellen Schulten Baumer still takes the lead in the standings.

Unlucky circumstances occurred, as Grand Prix-winner and wonderful WEG-medal-winner Danish Andreas Helgstrand didn’t manage to give another exciting battle between the giants Jan Brink and himself challenging each other with their horses, the grey mare Blue Hors Matiné and the chestnut stallion Briar. During the Freestyle performance the spectacular moving Matiné obviously kicked herself and she ended the test not quite regular.

The Swedish crowd also enthused about Marlies van Baalen showing the former world champion showjumping as a six year old, stallion BMC Kigali. The Frank Sinatra music fitted him like a T. Olympian Marlies van Baalen waved all compliments towards her mother Coby van Baalen and trainer Johann Hinnemann for the wonderful schooling of the horse. Talking about the subject of winner Jan Brink, management: in the next World Cup™ Qualifier in London she will bring the chestnut stallion BMC Relevant that she showed in Maastricht last week.